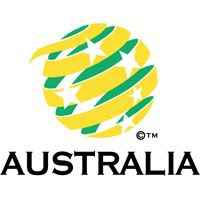 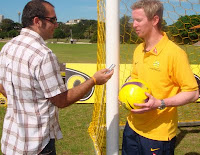 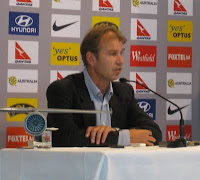 One of Australia’s best performances under Pim Verbeek led to a flattering 3-0 score line over a luckless Irish in Limerick on Wednesday.

With the pressure of having to qualify for a World Cup off the Socceroos shoulders the team played a more fluid up tempo brand of football. Two quality goals by Tim Cahill and a long rage bomb by David Carney during injury time added a gloss to what was a polished performance by the Socceroos.

Before the game, I was involved with some pre-match banter with Damien an English based Irish friend of mine.I put forward to Damien that the Socceroos were going to kick some Irish butt.

“Keep an eye on this Ireland team - we might have to meet again next summer! Trappatoni has got us playing at an extremely decent, functional, boring and consistent level and the odd flash of brilliance from the likes of McGeady, Duff, Keane, Hunt or Steven Ireland (if he ever returns) might just take us to the very top!” finished the excited leprechaun.

So with Damien’s warning I expected the Socceroos to be given a hard game as the Irish side was filled with Premier League players and an important World Cup qualifying game against Cyprus was only a month away.

Instead the Socceroos (16) ranked 19 places higher than their Irish (37) counterparts played all over the home team save for when Tottenham striker Robbie Keane had a shot saved in the first half and one blocked in the second .

For most of the match the Irish sat deep and allowed the Socceroos to move the ball comfortably with Turkish based midfield enforcer Mile Jedinak and Dynamo Moscow man Luke Wilkshire feeding quality balls to Tim Cahill, Harry Kewell and Mark Bresciano. The fullbacks Rhys Williams and David Carney played well nullifying the Irish attack while also surging forward on occasion.

Williams who plays with Middlesbrough has played two quality games at right back and his emergence now gives the Socceroos depth in that position.

Luke Wilkshire produced a great performance in midfield. The versatile 27 year old has played primarily in the middle of the park for FC Twente and Dynamo Moscow and gives the Socceroos more depth in a talented midfield.

After the game Ireland boss Giovanni Trappatonni conceded his team played badly: "It was a severe lesson for us, I am a little bit disappointed with the team," the 70-year-old Italian said.

With World Cup places up for grabs a performance like this will put pressure on the players who were absent, and that can only be a good thing with South Africa closing in on the horizon.