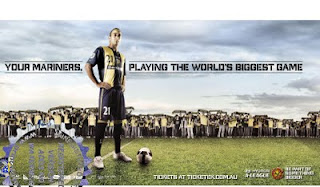 So what does season five have install for the Mariners? Grand Finalist in season one and three, every season they seem to be written off my most pundits.

While the Mariners have been undefeated in their seven pre-season fixtures, their only victory over an A-League side was against the North Queensland Fury. However there are signs that the Mariners will be competitive if not spectacular; they did get draws away to Sydney FC and Gold Coast United and a played out a home draw to Wellington Phoenix in their previous pre-season fixture.


In truth the Mariners loss of form can be attributed to a few factors. The first one, and I’m sure Mariners fans, coaching staff and anyone involved in the club will be sick of hearing his name, the ghost of the Mariners winning past Mile Jedinak. Since the midfield enforcer and current Socceroo left for Turkey the Mariners have not won a single competitive game. Save for that pre-season friendly win against the Fury.

The second factor behind the Mariners run of poor form has been the loss of ex- assistant coach Ian Ferguson, now in charge of new boys North Queensland Fury. The former Glasgow Rangers player Ferguson was well liked by the players, fans and staff and his loss while not getting the same attention as Jedinak’s departure is still being felt now.

There have also been rumours circling the club during the off-season of current- Socceroos assistant coach Graham Arnold replacing coach Lawrie McKinna.

"Let me just say that Lawrie McKinna is not under siege and nor is his assistant Alex Tobin," Mariners chief executive Lyall Gorman said to the Daily Telegraph on July 11.

Gorman admitted he had spoken to Arnold and did not rule out approaching him after his contract with the FFA had finished.
"He is contracted to Football Federation Australia until the end of the World Cup," Gorman said. "If and when he becomes available, we'd be silly not to talk to him. He's one of the most respected coaches in Australia."

Lawrie McKinna has brought in an English and Scottish flavour to Gosford this season much to the chagrin of some well known media pundits.
The Mariners have added English defender Chris Doig (Northampton Town), midfielder Shane Huke (Dagenham & Redbridge) who fans would have seen in action during the AFC championship and returning back home is Adam Kwasnik who had a stint with Wellington Phoenix.

An interesting signing the Mariners made this week was the capture of former Celtic youngster Michael McGinley on a two year deal. The midfielder made his first team debut at Parkhead as an 18 year old after rejecting a move to Manchester United to remain at the Scottish Premier League giants, and went on to represent his adopted country at the Under 20s World Cup.

The Wellington-born 22 year old has been trailing with the Mariners for the past two weeks, and after impressing in draws against Gold Coast United and Wellington Phoenix, has joined the for season five.

The Future Looks Mariners Yellow
While the past seems to be haunting the Mariners the future looks to appear bright. The Mariners were the first A-League club to set up a youth academy and the club has lodged a formal Development Application with Wyong Shire Council and plans are now in place to construct a professional sporting facility in Tuggerah.

The facility has a working name called the Centre of Football Excellence and what is being planned to be built is six full sized playing fields, including a boutique arena, 10 small sided, multi-sport fields, a six-story administration building, a sports science building, a 120-room accommodation block, an indoor aquatic centre, gymnasium, and a refurbished and extended licensed club.

The Cental Coast also strengthened their Sheffield United link with the blades owner Kevin McCabe joining the Mariners board.

"The Centre of Excellence project is close to commencement and Kevin's experience in being involved with these types of projects will be invaluable as we continue our quest to make the development the hub of football excellence in this country," said Mariners Executive Chairman Lyall Gorman.

The bookmakers have the Central Coast Mariners ranked 7th

The Mariners open A-League season 5 on August 6 with a game against the reigning A-League champions Melbourne Victory at Etihad Stadium. Kick-off is at 8pm.

PLAYERS TO WATCH
None. I am bored already not talking about them. New signings are on the horizon. Adrian Caceras is good to watch, but he is always in the bench. Mat Simon barnstorming style is starting to get him goals.

FAN CULTURE
The Marinators. At least someone is trying.

Key Signing: Midfielder Michael McGlinchey made his first team debut at Parkhead as an 18 year old after rejecting a move to Manchester United to remain at the Scottish Premier League giants, and went on to represent his adopted country at the Under 20s World Cup.

Key Player: Mile Jedinak; the ghost of victory past haunts the Mariners.

A Football Story Prediction: Will miss the Finals

Something interesting: Has the most picturesque ground overlooking the water, and the Mariners give away cool freebies @ their home games.

Coach Quote: “Anyone want to come over for a BBQ at mine?”

Fact: The Mariners have not won a senior game save for a pre-season win against the Fury since the Jedi-night left.

Thought: Will bring other teams unwillingly down to their level, which will make them competitive.

As in years gone by the Coast FM A-Team will bring all the action to the airways and the internet for each and every one of the Central Coast Mariners matches.