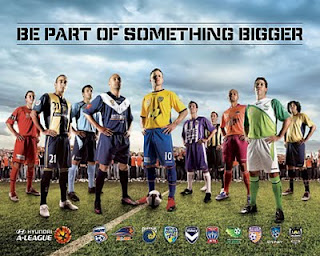 Are you sick of waiting for the A-League to begin? I know I am. I think the powers that be are asking so much of us fans to wait around almost seven long months before a football is miss-kicked in anger.

If football fans know about any thing it sure is waiting. Sometimes fans can wait for ever for a shot, a good pass and even weeks before we see our team score a goal (Brisbane Roar) let alone win a game (Central Coast Mariners).

A local derby between Brisbane Roar and Gold Coast United at Suncorp Stadium, also on Saturday; and

Football Federation Australia (FFA) unveiled a new advertising campaign for the Hyundai A-League competition today at the launch of the 2009/10 season.

"With the expansion of the Hyundai A-League this coming season, we thought it was important to emphasise these links and draw out the connections” Ben Buckley said.

"The Hyundai A-League is the best way to experience the excitement, passion and emotion of the world's most popular game week-in, week-out.”

"Interest in football is on the rise due to the Qantas Socceroos qualifying for next year's 2010 FIFA World Cup in South Africa, as well as our bid for the 2018 or 2022 FIFA World Cup.

The recent influx of returning Socceroos was part of the vision of the advertising campaign:

"As well as Craig Moore (Brisbane Roar), we also now have Jason Culina (Gold Coast United), Mile Sterjovski, Chris Coyne and Jacob Burns (Perth Glory) all playing in the competition as well as one of the game's legends, Robbie Fowler (North Queensland Fury)."

FFA Chief Commercial Officer, John O'Sullivan, said that the brief to advertising agency Lowe Sydney was to create a campaign that clearly articulated the scale and international nature of football, whilst also highlighting the local version.

"The opportunity existed to continue to build credibility in, and a legacy for, the Hyundai A-League through the strength of football in Australia thanks to the Qantas Socceroos, Adelaide United's performances last year in the Asian Champions League and the bid for the 2018/2022 FIFA World Cup.

"We know that football fans are proud of the fact that football is the one truly global game, and we want to continue to build Hyundai A-League clubs with this natural connection," said O'Sullivan.

“We hope the advertisement encourages fans to ‘think global, act local’ when it comes to being part of the football family.”

The campaign launched on FOX SPORTS, FOXTEL, free-to-air television, in cinema and outdoors on Sunday night. It is directed by Bruce Hunt and produced by Revolver Films with music by Spiderbait..

The song that is used for the adverstiment is called “Shazam” and is taken from the 1999 Album Grand Slam, when in my humble opinion the Bait where at their peak.

The ad features A-League players like exciting young Sydney FC winger Koffi Danning, Brisbane Roar and “next big thing” Mitch Nichols and players from overseas clubs like Celtic all playing a game of football on a huge pitch. The players in the ad are wearing their respective club kits. It also features Kristian Sarkies beating players and shooting a free kick on target, only the magic of advertising can provide such images.