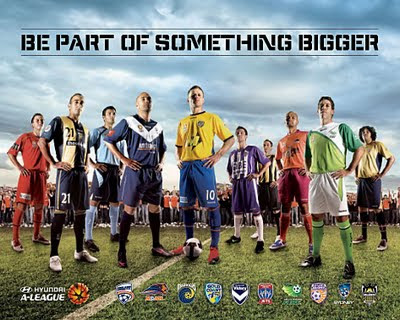 The story of round four was Gold Coast United falling down to earth with an Icarus like thud after Newcastle Jets Striker Sean “looks like Wayne” Rooney scored a cracker that melted the wings of Gold Coast United’s billionaire owner Clive Palmer.

The Prophecy that Gold Coast United would go into their inaugural A League season undefeated proved a false one. Let’s see what Clive Palmer and Miron Bleiberg will say this week. I’m sure other clubs will be happy to offer up servings of humble pie.

Sydney FC bounced back from lasts week’s long ball nightmare with a pretty comfortable 2-0 home win over bogey side Wellington Phoenix. The win ensured the Bling went top of the ladder after the Gold Coast shock loss to Newcastle.

The introduction of Steve Corica midway through the second half provided the impetus for Sydney to go on and win the game. Both goals came late in the second half with John Aloisi getting on the end of a fine Alex Brosque cross to score the crucial second goal. This time the Socceroo was applauded rather than booed off the field when he was substituted late in the match. A far different scenario from the contrasting scene last season when the Sydney FC boo boys were on Aloisi’s case

The Gold Coast United – Sydney FC encounter on Saturday early evening looms as the season’s first top of the table clash. The clash of the A League biggest egos will certainly be the game of round five.

So back to the opening game of round four and it should have seen North Queensland Fury get their first ever three points. The Fury played well against lacklustre Adelaide United. However the Fury had to settle for a 3-3 draw after Adelaide scored a late penalty to tie the game. Robbie Fowler opened the scoring for the Fury with a great volley from a Paul Robinson cross. The Scouse legend ran over 50 metres to meet that cross after he initially started the build up play in his won half. It’s the longest the former Liverpool legend has run in over three seasons and my sources tell me Robbie may have just finished huffing and puffing now.

Fury Striker Dyron Dall sounds like an Indian dish and the former Netherlands Antilles Striker substitute performance in the second half for the Fury was both spicy and sour. With the score 2-1 to the Reds, Dall scored the equaliser after he was let through on goal by an excellent ball by Fred Agius. Aguis then supplied another excellent cross and the Fury led 3-2. However Dall was somehow tricked into playing volleyball and gave away a ludicrous late penalty which was converted by Lucas Pantelis who ended up getting a double.

The much talked about Perth Glory have finally started to live up to the hype and high expectations. The Glory played with a quicker tempo than in previous games and took advantage of the Victory’s hectic travel schedule to beat the current A League champions 2-1. Melbourne had to endure two long away trips in a row the first was in Townsville last week, the next trip to Perth seemed like it was one long road trip too many. Branko Jelic will never score two easier goals.

The Brisbane Roar is losing more friends and fans with every game they play. Their last two home games have yielded only 14 thousand fans and Matt McKay’s injury makes their midfield look thin and injured. Craig Moore had his best game for the Roar in what was an unspectacular 1-0 win over the Central Coast Mariners.

Round four was a much better spectacle than last week. The Glory and particularly the Jets surprise win over the White Shoe Brigade of the Gold Coast makes the A League much more than a one horse race and its unpredictable nature is just what the fans want to see, unlike some other more illustrious Football competitions that are played around the world.

A League Import Watch: Sung Hwan Byun for Sydney FC had his best game of the season so far. Karol Kisel and Stephen Keller were strong in a round were the locals made most of the good headlines. Newcastle Jets duo Song and Vignaroli played well with the former showing some neat skill and the latter also played well but unfortunately for the Jets seems injury prone. Henrique for Brisbane Roar is showing quality every week and just imagine what Charlie Miller could do if he had the fitness of an athlete.

A-League Socceroo Watch: John Aloisi, Ljubo Milicevic, Chris Coyne, Craig Moore and Shane Stefanutto had dominant displays for their teams while Jason Culina and Mile Sterjovsjki were quiet; the latter is still to show his best this season.

A Football Story Hot Spot: Fred Agius showed us that he has the skills to pay the bills. Aguis is the X factor the Fury need and set up both goals in the second half for the Fury.

A Football Story Odd Spot: From historic hero to absurd zero, Dyron Dall had what is called a brain explosion giving away a penalty to deny the Fury their first ever historic A League win.

A Football Story Goal of the Week: Sean Rooney made dutch defender Bas Van Den Brink look like a confused Albino. Rooney turned the Dutchman inside out and smashed a shot into the net to re-ignite the Jets season.