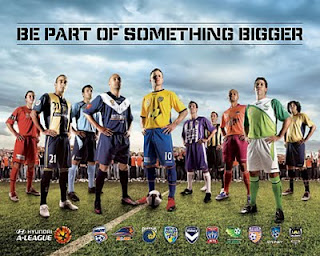 After three rounds the A League had to come down from its two week high and just like a big weekend the come down sure wasn’t pretty.

The third round began on Friday night in Adelaide with the promise of a close contest between Aurelio “Mr Average” Vidmar’s Reds taking on the White Shoe Brigade of Miron “The Joker“ Bleiberg.

The Gold Coast United look a level and half above everyone other team. They outplayed Adelaide at home and even Steve Fitzsimmons managed to score against them. Shane Smeltz is on track to score 30 goals or more if he maintains the rage and stays fit. Jason Culina is a joy to watch his movement after passing is a lesson for all the kiddies and by kiddies I mean every other player in the A league who passes and then does an impersonation of a statute.

Jason Culina said some wise things about the A-League to SBS this week: “Technically there are some good players but when you compare them to those who played in the old NSL, I’d have to say there needs to be some improvement.

“There might be plenty of foreigners but in the old days we had plenty of Aussie players who were just as good or even better.”

How true that statement was in some games this week. Step up Central Coast Mariners and Sydney FC for dishing up a steaming pile of shite. Only for the last three minutes of each half did the players wake up. The other 86 minutes was pure granite (Damo copywrite). Swiss import Stephen Keller for Sydney FC got the hoofer of the week.

The North Queensland Fury - Melbourne Victory game wasn’t much better. The Fury looks like a blind man wondering around in the dark. At least the blind man has the use of his other senses for help. Victory Striker Archie Thompson could have got a hat trick. The Fury keeper Paul Henderson amassed over 100 games with Bradford and Leicester City and finally showed that his time overseas was not a waste with some good saves to stop Thompson .

Brisbane Roar self destructed after leading 1-0 against Wellington Phoenix. The new Shane Smeltz for the Phoenix Chris Greencare headed the equaliser off a sublime cross by Daniel. The Roar should have won at home; what’s new? Michael Ferrante for Wellington got the miss of the week.

Perth Glory finally ended their winless streak and managed to keep a clean sheet for once. Adriano Pellegrino’s finish in the 2-0 win over the Jets was particularly outstanding.

A League Import Watch: Adama Traore for Gold Coast shone again. Brisbane Roar Trio Henrique, Serjio Van Dijk and Charlie Miller had their moments and Chris Greencare, Paul Ifil and Daniel for Wellington also had theirs. That was the best of a rather quiet bunch in a round that was lacking in action and goals.

A-League Socceroo Watch: I don’t think Socceroos Pim Verbeek would have been impressed this round, not many players stood out. Only Jason Culina is showing them all how it's done.

Hot Spot: The play of the Gold Coast on and off the field. A perfect example of how to make the ball and the media work for you. Now advertise the game to the fans in your local area.

Odd Spot: Tommy Oar rowed his way to a Red Card against the Phoenix and his boss Frank Farina thought he’d join him watching in the stands.

Quotes: First Mr Average:“ Calling me Mr Average, whether he meant it or not, doesn't particularly worry me but it denigrates every other coach in the A-League. "With the team he has at his disposal, if they don't win the league by 15 points there is something seriously wrong." Aurelio Vidmar talking about Miron, who else?

"If someone came to play against me in a private jet I'd hate them too.

"We are the Manchester United or Real Madrid of the A-League. There will be a lot of happy people if we lose.” Miron talking himself up, what else?

Goal of the Week: Adriano Pellegrino was slated by the Fox Sports commentary team all game. It was as much a pleasure watching the half volley go in as it was then hearing the pundits have to swallow their own words.