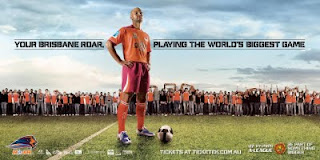 Brisbane Roar (6th)
It will be a weird year for the Brisbane Roar. They have had a change of name and a new chairman in former state MP Chris Bombolas. Some of their supporters have been changing their allegiances to the two Queensland teams by going south (Gold Coast) or north (Townsville).

The Roar has lost Tahj Minniecon to Gold Coast United and Massimo Murdocca to a long term injury.

PLAYERS TO WATCH
Not too many new signings: 24 year old Brazilian Henrique came late into the campaign and showed glimpses of skill that could be exciting to watch. Michael Zullo will be hoping to benefit from the second coming of Robbie Kruse, and then there is the Indonesian Dutchman with the Brazilian name Sergio Van Dijk, who was on fire during the second half of last season. Mitch Nichols and Tommy Oar are two other exciting players to watch out for.

A Football Story Prediction:Brisbane to make the finals and perhaps even the grand final.

FAN CULTURE
The Den is not the best supporter’s end of the A-League, but can still Roar.

Key Signing: Henrique ( Formiga, Brazil - 1 year), fans had a taste of the small Brazilian last season, will be one to look out for.

Key Player: Craig Moore is the rock at the back for the Roar.

Something interesting:The roar once signed a player dubbed the Chinese David Beckham.

Coach Quote: "Can you call a cab for me please?"

Fact: The Chinese David Beckham was not very good.

Thought: When they get there shit together can be great to watch, however sometimes their players can melt when in front of goal.