Not a Local League for Local Coaches: Round 7 Sydney FC Analysis

One of the best things about your team getting a win when they play badly is the reaction of the losing coach.


Having to front a press conference after watching your team out- play the opposition is bound to make the coach say some crazy things.

So it was no surprise that ex Sydney FC boss Branko Culina marched to the front of the pack in the A League Coaches Sore Loser Award:

"I don't care what their coach says and the fact that he's on $500,000 and I'm on 50 bucks or whatever it is, but if that's what the foreigners are going to bring to this game, let's have more local coaches."

"There was only one team that really deserved to win that game, but we can only blame ourselves, we can't blame anyone else."

John Kosmina has usually taken out the award every year and he even managed to win it when he took a year off from coaching.

Isn’t it time to move away from the most boring debate in Australian Football? The overseas coach’s vs local coaches debate makes me yawn and say things like oh dear.......... 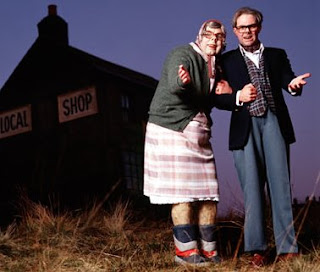 To me the debate sounds like an episode of League of Gentleman featuring  Tubbs (Michael Cockerill) and Edward (Branko Culina) http://www.youtube.com/watch?v=zOGAAlHzF4o
Tubbs (Cockerill): “I haven’t seen you before are you a local?

Edward (Culina): “Are you a local coach? This is a local league for local coaches......this is a decent town and a local team; there is nothing for you here!


So to the action on the bumpy SFS surface. If you take out Mark Bridge’s goal (that by the way was deceivingly brilliant because he got a friendly SFS bobble that usually sees the ball land in the middle of bay 23 next to deadpool who holds the megaphone) and Corica’s excellent taken penalty the performance by Sydney FC to quote Jorge Valdano “was like watching shit on a stick”.

One of the positives apart from winning was seeing Stuart “Disco Stu” Musalik play in midfield again; he is one of my favourites. Simon Colisimo had another good game; but the performances of his teammates are making him look good.

The decision to rest Karol Kisel, Stephen Keller and John Aloisi due to injury or otherwise at least showed that Sydney FC has some depth. The performance of Musalik Sebastian Ryall and Mark Bridge means that all three veterans will have to work harder at training this week, it might be tough to get back in the starting line up since the instruction by Lavicka all season has been “quicker, play quicker!”

Alex Brosque hasn’t scored a goal yet but he was won three penalties. Memo to his teammates: Just give Brosque the ball when he is in the box running towards the by-line. Like bees to honey and flies to shit A League keepers are attracted to the option of bringing him down when there is no apparent danger.

So forget about watching a slick passing team that will play exhilarating football. Sydney FC will win games because they hard to beat. Branko and all the other local coaches may have a right to be jealous at the huge salary our Bohemian maestro is getting. However if the Czech delivers the precious things that us Sydney FC fans covets then there certainly will not be any trouble here!