Musings on the State Of Australian Football

Australian football speculators have had a busy week trying to figure out all manner of things that are wrong with Australian football at the moment. If it’s not low crowds, it’s the inadequate shouting from the sideline by Dutch coaches at the Youth World Cup.

Or it’s the seemingly bungled attempt to get a 12th team in the A League.

If you look at it like Fox News the America news cable channel, you would say we should be on “High Alert” and perhaps the alert should be scrolled underneath while games are on.

“Be alert not alarmed” would be the Australian version, especially if the Central Coast Mariners and WellingtonPhoenix are playing.

3. Some of the goals this season have been quite spectacular. So, too, has some of the poor play. One of the eye-catching themes is the hogging.

When a teammate is in a much better position, you see quixotic attempts on goal by left backs and central defenders shooting from 30 yards out. You’re a striker, I’m a striker, everyone’s a striker! 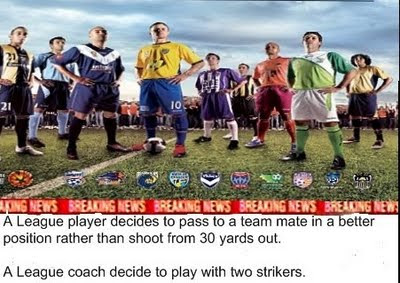 4. Let’s make the A-League more entertaining by adding a conspiracy theory. The A-League has been infiltrated byAFL spies. Ben Buckley and Archie Fraser are the hired goons.

5. I can’t blame folks for not turning up to A-League games. After two months into a very entertaining and compelling League/AFL finals series, it’s not like the crowds are going to come back after the finals are finished.

I hope the crowds do come back, but why would you buy a season ticket now? After eight weeks has passed.

The betting agency/commentators think it is.

7. A bit of consistency in the fixture list would be good. What happened to the simple Home and Away fixture? (Yes, yes, yes the Neighbours’ chicks are hotter).

I’m very confused at the scheduling.

Sydney FC will have played the Mariners twice and the Fury twice before they have even played Melbourne Victoryonce.

8. I have to say that there are teams that are putting me to sleep. Perth Glory, Central Coast Mariners Wellington Phoenix, are some examples. I could go on, but I would probably name all the ten teams. To me, the tempo is too slow and the intensity only lasts for short sporadic moments.

9. A-League coaches are too nice to each other and have the same tactics or anti-tactic. More Branko and Miron type outbursts are needed (don’t say sorry afterwards).

How many sessions does it take to learn the one striker and nine defensive midfielder tactic? Isn’t a tactic used to get some sort of result?

10. Finally, I blame all the short-comings of season five of the A-League on the youth. They are a expect everything and pay for nothing generation. Kids can already download movies, games and music for free.

Why should they pay to watch a game with their parent’s hard earned money when they can stay at home and watch a high intensity Rugby League or AFL end of season game?