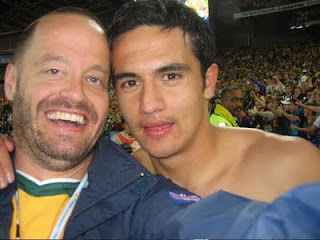 If you have ever listened to Triple J, ABC radio or watched ABC television in the last decade you would have heard and seen Adam Spencer.
Adam is a mad football fan.
In fact after the Socceroos triumphant and dramatic penalty win over Uruguay in 2005, a moment that secured Australia’s qualification for the World Cup after a 32 year wait, Adam Spencer ran onto the pitch, and joined in the wild scenes of joy and jubilation. (see photo above.)
Half Time Heroes: How did you come to love the beautiful game?
Adam Spencer: I played football from under 5’s with the Gladesville Ravens, and then went off to Gladesville Uniting for six years, and then at High School I played for St Aloysius. I have never played a game of League in my life and maybe three games of Union. I love the poetry and individuality of Australian Rules, a truly beautiful game, but the world game has a natural beauty for mine.
HTH: Your A League team?
AS: S-Y-D-N-E-Y, I am Sydney till I die. (Except when I am at my mother in laws house on the Central Coast, in which case the Mariners go pretty well too.)
HTH:  Your Overseas Team
AS: The First game of English Football I ever saw was the 1927 FA Cup Final, which my beloved Manchester United won 2-1. Mum and Dad let me stay up past midnight as an eight year old to watch and I have repaid the Red Devils for that life changing experience with everlasting loyalty. As for Adults who say they say they support United and can’t name a player pre-Ronaldo I have as much respect for them as a Chelsea fan who doesn’t own a Jersey more than three years old!
HTH: Favourite overseas player?
AS: Andrei Kanchelskis went alright ……as did Peter Schmeichel …….There will never be another Ryan Giggs.
HTH: Favourite Australian Player?
AS: I was lucky enough to say on air about five years ago that “Tim Cahill could well end up the greatest player that this country has produced”……..I feel vindicated.
HTH: Tell us about the World Cup Qualification in 2005?
AS: I had done the pre-match on field entertainment….So as the shot(Aloisi’s penalty) went in I flashed my badge and hopped the fence……The fat guy in the background doing the victory lap that’s me……Don’t believe me……(photo attached)
HTH: How do you think the Socceroos will fare in South Africa Next year?
AS: We’ll give it a red hot crack – I can’t wait to see the draw we are given as the 14th team in the world-if we don’t jag a group of death we’ll go fine.
HTH: Have Socceroos been boring, does it matter how they play or is it just about winning?
AS: Huh…What’s that over there……The Score board!!!!.......Sorry –What was the Question?
HTH Can Australia can host the World Cup in 2018/22 and why?
AS: Yes…..Why not.
HTH: Most cherished moment in Football?
AS: The final whistle in the North Western Suburbs Womens’ football all age 3rd grade Grand Final 2006. As coach of the 3-0 victors I could have cried (Actually I did-don’t tell the girls)
HTH: Can you believe we are on our way to our second World Cup in a row?
AS: What amazed me was the muted reaction to qualifying….. As a nation we expected it……What a transition.
HTH: What does football need to do or change?
AS: Offside rule should give the benefit of the doubt to the attacking side-only if the assistant referee can see clear and unambiguous space behind the fullback should the attacking player be called offside
HTH: You are a pretty smart guy does the tactical side of the game interest you? Any ideas about formation and shape you have?
AS: In advance of my team “702 United” Stepping on the pitch for the master games 04/05 World Championships, I can’t comment on formations or Tactics……..suffice to say I’m very excited.
Click the link to got to the HTH page:  http://issuu.com/nearpost/docs/halftimeheroessept09/6
Posted by A Football Story at 9/15/2009 01:55:00 PM