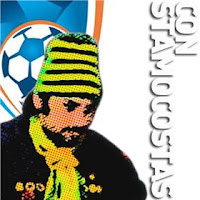 FIRST off Sydney FC was robbed!

Everyone seems to have missed the push on the Sydney FC defender by Kristian Rees in the penalty box for the White Shoe Brigade's first goal. It allowed Shane Smeltz to loop in a header for the goal.

C'mon where is the whingeing Lavicka? Where is the referee bitch fight? Perhaps you just don't want it. Watch the replay and I'm sure you will agree. Those fouls are pulled up by the ref in the box all the time.

So that is the end of the whingeing. Shane Smeltz did time his run perfectly and it was an excellent header. You can't say Sydney deserved to win the game.

While I am disappointed Sydney FC lost I thought the performance was good and it was even better when Karol Kisel was replaced in the second half. What's happened to Disco Stu?
Kofi Danning started on the subs bench which I thought was odd. He made a difference when he came on.

Hopefully the hype in the early rounds hasn't affected the kid. When Steve Corica came on and Brendan Gan moved into the centre of midfield I thought it gave the Bling much more width. I feel that our play is too narrow at times, especially in attack.

Both teams were up for the game and Gold Coast showed they can play without Jason Culina. The biggest 'if only' moment for Sydney came in the first half when Alex Brosque and John Aloisi combined well.

I'm sure the Gold Coast players were happy to get extra touches on the ball and were able to make a mistake without Culina berating them for it.
I have a short fuse and if someone yelled at me for every missed pass I made or every bad shot, it wouldn't take long for me to throw the F bomb his way. Perhaps that is the reason why I write about football rather than play it.

The Gold Coast learnt their lesson after the Jets loss the previous week and only limited Sydney FC to a couple of half chances for the game. I think Corica should get a start for the next game.
In some weird scheduling scenario Sydney FC face North Queensland Fury only five weeks after Sydney beat them in round one.

I'm sure the team from tropics will be out for some furious revenge. It will be good to see Robbie Fowler up close. He seems like he is going against the grain of former A League marquees and could provide a very healthy return in terms of goals.

I would welcome Dyron Daal to defend corners for the Fury anytime. Sydney must be cautious as the Fury are inching closer to their first ever win with every game.