What kinda crazy will Maradona get up to during this World Cup?


The World Cup hype and coverage has been ramped up to overdrive this week. The announcement of the World Cup players squads, the World Cup themed TV advertisements and the end of the European football seasons has put the World Cup in South Africa front and centre of the crazy and casual football fans consciousness.

To get in the mood I have been reading and watching World Cup related books and films. I am in the middle of reading the excellent Maradona biography by Jimmy Burns one of the best football writers around. The book is called "The Hand Of God, The Life of Maradona and delves into Maradona's personal and football life and as one reviewer put it 'Few people emerge innocent in this book.'

Maradona's Exclusion from 1978 Argentina WC Squad
What I found really eye opening was Maradona's exclusion from the 1978 World Cup Argentinian squad. Argentina went on to win that World Cup in Argentina. In the background of that triumph a Military Junta ran the country.

Here is an extract from the book on why then Argentine coach Luis Menotti  didn't pick the then 17 year old Maradona for the 1978 World Cup squad:

"Menotti told me he didn't pick Maradona because he believed he was still too young, both physically and emotionally, to deal with possible defeat - an assessment which appears at first sight to have been confirmed by Maradona's reaction to his exclusion.

'For the child prodigy who had for so many years been bent on winning the approval of his elders, the feeling of rejection by this latest of a series of father figures in his life was profoundly shocking. Without waiting for Menotti's explanation , Maradona locked himself out of and wept uncontrollably.

'He vowed never to forgive Menotti for the betrayal and to quit football altogether. 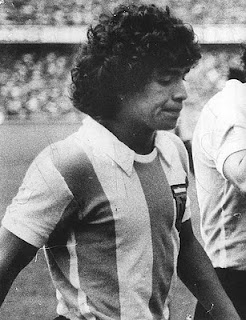 'According to witnesses who monitored the Argentine team closely at the time, Menotti had other, more personal reasons for excluding Maradona. A man of enormous ego, he was obsessed with the glory that victory would bring, and feared that any rival would eclipse him......that friendly against Hungary in which he had found himself almost bulldozed into bringing out the young player to the tribal cry of "Maradoona, Maradoona.'

(Maradona during his debut for Argentina in a game against Hungary, 27 February 1977)

Lucky for fans of the beautiful game Maradona didn't quit football and we all know the rest of the story. Reading on I found this next extract very engaging. Aside from the Military Junta exploiting the victory for political gain that accompanied Argentina's World Cup victory in 1978 there where question marks over how the victory was achieved.

"One medical source told me that in 1978 the 'whole of Argentine football was doping itself......I started a big fight to break the trend." Argentina had players who had been regularly provided with amphetamines while playing for their league teams, and who found in World Cup a suitably lax regime when it came to urine samples.

'According to other reports Mario Kempes and Alberto Tarantinoi were so "high" after playing one particular World Cup match that they had to keep on going for another hour before they came don again.

'One of the most extraordinary episodes of the World Cup involved the pregnant wife of the Argentine's team  waterboy. Her urine was used as a cover for an Argentine's player's in one of the competition dopes test." 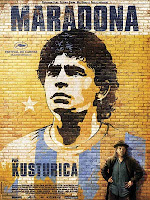 Speaking of doping and Argentinian football I also watched a documentary called Maradona by Kusterica. In a revealing interview Maradona had this to say about his well documented drug use.

'For 20 years during Havelange's (former FIFA boss from Brazil)  presidency Brazil did not win the World Cup. You know why? The man up there is just. The old man loves justice! If for 20 years a mafioso was unable to win the World Cup, kind of tough isn't it?(Maradona makes a gesture where he point to his right eye)

'I'm going to tell you the story. Argentina was eliminated from the World Cup (in 1994). We went to play Australia. It was a tie 1-1. We came back here and we qualified 1-0.  There was no doping case (Maradona shakes his finger) No drugs not over there, not over here. There was no ephedrine over there or over here. No cocaine over there or over here. During the World Cup after we beat Nigeria 2-1 they said: "They're screwing us up." (Maradona was kicked out of USA 94 after the Nigeria game)

"I'd say Havelange is the arms dealer, and Blatter sells the bullets" (both Maradona and Kusterica laugh after this quote).

On his fight against Cocaine addiction:
"Scoring a goal in front of 100,000 people, like I did with the English for example, was for me a normal thing. It was my game my life. When I came down, I was like everyone, all of you. And I could talk to you.  What messed me up was cocaine. But I was just like you. However when you let the tiger out, when I went onto the pitch, I was in command.

"Emir do you know what a player I'd have been if I hadn't taken coke? (he puts his hand together in a prayer gesture) What a player we lost! It's like a bad after taste. I could have been much more than I am. Yes. really it's true. I was born into football. I new who I was going to be. But I didn't know I was going to take coke." 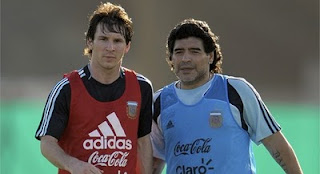 I can't wait to see what kinda crazy Maradona will get up to during this World Cup. Today the final Argentinian 23 man World Cup squad  was announced. Maradona will this time coach the side and the World Cup will be better for his crazy side line antics.

Hot off the Press: The Madness begins
I just saw this report in the Guardian:
http://www.guardian.co.uk/football/2010/may/20/diego-maradona-cameraman-world-cup


The Argentina coach Diego Maradona insulted an injured cameraman after accidentally running over his leg ahead of announcement of thealbiceleste World Cup squad.
Driving to yesterday's news conference in Buenos Aires, the 1986 World Cup winner was surrounded by journalists. One was hit and he fell to the ground.
According to a witness, Maradona's car rolled over the lower part of the cameraman's leg. "What an asshole you are," Maradona shouted from the car. "How can you put your leg there where it can get run over, man?" Paramedics attended to the cameraman, who was taken away for further treatment.
The 49-year-old coach then delivered the names of the 23-man squadfor the World Cup to the media. Maradona's World Cup preparation was disrupted in March when he needed minor facial surgery after being bitten by his dog.
Posted by A Football Story at 5/20/2010 04:16:00 PM