One Return Flight to the World Cup Please! 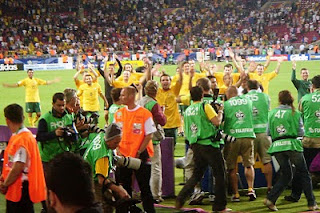 Forget about the likes of Harry Kewell, Tim Cahill, Mark Bresciano, Vince Grella, Brett Emerton, Craig Moore and Lucas Neill being the Socceroos most important players at the World Cup. The first 11 picks themselves and if any of the above players that I mentioned are fit or near it on  June 14 they will be shaking hands with German players while under their breath saying “wir sind dabei, Ihren ausgezeichneten englischen sprechenden deutschen Arsch zu kicken” which roughly translates to “we're going to kick your excellent English speaking German arse”


(I think I am in love with Google translate, and I want to tell it in all sorts of different languages).


The most important Socceroos that will be picked in the 23 man squad will be the next 11.  The reason I say this rather daft comment is that nine of the potential first 11 will be over 30 years old. Only Jason Culina and Luke Wilkshire are in their 20’s.There are five days between games during the group stage and I don’t really think  everyone in the first team will be able to play every minute of the Aussies three group games.
Below are the key players for the Socceroos who I think will struggle the most in terms of fitness. I have included a games/ goals comparison during the season passed and a comparison of the 05/06 season which preceded the Germany 06 campaign. Their potential understudy’s also are included and it also includes a comparison of age and games played during this season. 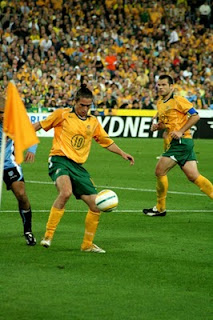 Harry Kewell
Harry was on fire until his recent groin injury derailed his recent good form. The backup plan is not Tommy Oar it’s Nikita Rukavystya. The former Perth Glory Striker has been playing regularly of late scoring 4 goals in 8 appearances for Belgian Club Rosalre. On his day he can open defences and score goals. If he is not on his day he can be caught offside and miss chances which Fox Sports commentator Robbie Slater would say “he should’ve done better”  no shit Sherlock! James Troisi is another candidate that could be chosen as back up but Pim has not picked him for a while.
Tim Cahill
Tim Cahill is the fitter and the most inform of the all the key players but will he be able to last all the three games? With the amount of running and the expectation  that every team he plays against will double team him our little Timmy soldier will have an extra burden in this World Cup campaign to deliver again. If Nick Carle makes the plane to South Africa it will at least mute some members of the media who have taken on his bidding probably to the detriment of the player. His performance against Japan in the final World Cup Qualifying game could get him on the plane to South Africa.

Mark Bresciano
By his standard Mark did not have the best World Cup in Germany. He is probably the biggest injury concern behind Harry Kewell.  Brett Holman could see more game time at this World Cup than he and even the fans expect.. Brett Holman is a favourite of Pim and his experience in the Socceroos qualifying campaign should see him on the plane. I will cross my fingers and hope he plays above himself, but I doubt it.

Vince Grella
The Socceroos midfield enforcer is struggling to get on the park let alone get a full game. His move to Blackburn has been littered with injuries.  Mile Jedinak has had an excellent season scoring goals and playing full games. I expect to see him get some decent game time in Germany if Grella struggles. I think Mile  has overtaken Carl Valeri in the pecking order due to his excellent season with Turkish club Antalyaspor however I expect both should be going to South Africa.

Brett Emerton
Brett Emerton is arguably Australia’s fittest player and he is a key element of the Socceroos squad.  Pim used Brett as a right midfielder/winger in his famous 4-2-3-1.Dario Vidosic moved to a second division German side to get more game time and his performances against Japan and Netherlands could see him picked as back up. Mile Sterjovski and Richard Garcia are the other two options.

Craig Moore
Craig Moore has left more clubs early than a bored hipster on a Saturday night out on Oxford St. His form in the A League dipped and his barge arse was almost getting as big as Lucas Neill’s. As a Socceroo fan I would be worried what the German, Ghanaian and Serbian Strikers will do  to our slow and ageing defence. The backup looks like being Mark Milligan and Jade North however calls from some section state that Eddie Bosnar and Sasa Ognenovski should be considered. They both have the best record in terms of games played and have the height to combat the tall German and Serbian strikers. But Pim just doesn’t like them and have zero experience with the national team. I would pick Mathew Spiranovic over Jade North. 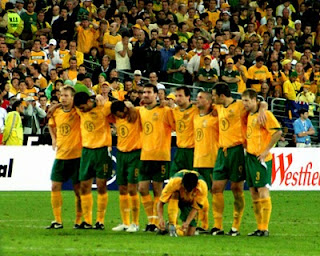