How to fake it as a Soccerooos Supporter 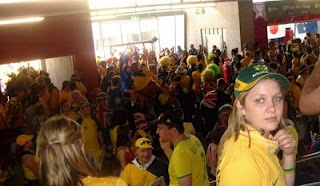 It’s finally here. I have been waiting close to four years and finally I can get my Wallabies Jersey out, put on my Kangaroos socks and pump up my Italia 90 Soccer ball. That’s right folks I’m here to ride the Quadraphonic football Bandwagon.

Here are a few tips and rules to make sure that you are fully attached to the Quadraphonic Football Bandwagon this World Cup. The key is to appear you have loved the game all your life even though you have never watched a game from start to finish, have never attended a live game or cannot explain the off side rule determining the difference between a player being active and inactive
Who are The Players?
Australian fans need to know only three players. Harry Kewell, Tim Cahill and Lucas Neil. I have chosen players with the most Anglo Saxon sounding names so you don’t get confused. No need for you ethnics to worry about this as you guys love the game already. Remember Messi is from Argentina and Ronaldo is from Portugal. Unfortunately Beckham is injured so keep that in mind when you engage in football speak, knowing just a few simple facts already increases your football cred.
Who are The Teams?
Usually you have a couple of teams that you support because your home team will more than likely get knocked out early. Because the World Cup is played by countries other than those who play Cricket and Rugby this may seem like information overload at the beginning.

There are 32 teams at this World Cup and it’s a great way to catch up on your geography knowledge.  Aussies love to travel so if you have been teaching English in Japan or been running with the bulls in Spain or getting naked at the October fest in Germany you can choose that country as your second team and it allows you to tell travel stories that hitherto have so far been ignored.

Alternatively you can pick a country you have never heard of like Slovenia as your second team. Make sure you remember one crazy fact about them and unleash this crazy piece of football trivia during one of the many World Cup themed parties that will be held during the finals. Again your football cred is rising!
What Clothing Should I wear?
Vintage is the Word. Spend a couple of days at a second hand clothes shop and if you find what appears to be an old Socceroo Jersey then get it. You will have a great story to tell on how you found it and your Football cred will rise. However if you do pick an old Wallabies Jersey or a Limited Overs Cricket shirt then you will be made fun of by the Australian Football Supporter’s Police( AFSP).  The AFSP is always on patrol.  They can be spotted easily, usually they are wearing the latest replica shirt or the 1974 vintage shirt and have their name own name printed on the back of the shirt.
What do I chant? 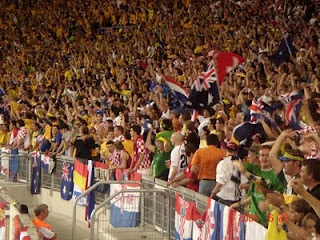 As mentioned before the Australian Football Supporter’s Police are always on patrol to make sure any band wagoners are not acting out of line with the AFSP code.  One of the senior members of the AFSP will usually be leading the chants. At first this loud group chanting may seem lame and almost like a bad church psalm. Don’t be so self conscious make sure you have drunk enough of the officially licensed beer. Yes its Budweiser this World Cup but harden up.
Now that you are well sloshed singing English themed chants with Australian words will not seem so pathetic if everyone is doing it around you. The whistling song from the film The Great Escape and yelling Aussie at the end of the whistle bit for three hours continually is a good way to start. Don’t get to cocky where you start wanting to start your own chants otherwise the AFSP will come down on you so hard they may never invite you to a football outing again. Remember not joining in the chanting makes you lose any football cred you may have gained earlier. The AFSP may even start chanting “sing or fuck off”

And do not chant Aussie, Ausssie, Aussie, OI, OI, OI? Do I have to explain why?
Should I blame the Coach?
Always blame the coach. A scapegoat must be found early, this way when we lose you can funnel your anger in this direction; it will seem like to all around you that you are a football expert.
What should I say?
Saying any of the below phrases during the Socceroos first game against Germany will get you invited to the next match and virtually seal your position from Band Wagoner supporter to a fully fledged Socceroo supporter.
Say things like:
“Pim Verbeek is just a poor man’s Gus Hiddink”
“Tim Cahill can sure jump”
“I really think we will miss Mark Viduka”
“I miss Johnny Warren”
“That Josh Kennedy sure is tall and he looks like Jesus”
“I hope Harry doesn’t injure his groin”
“I hope Lucas Neil doesn’t dive in again, even though that cheating Italian dived”
“I hope Brett Holman doesn’t play”
“I wish Pim Verbeek would pick Nicky Carle he is the most blah blah”
“Do you think Pim will play 4-2-3-1?”
This last line is optional. As a Band Wagoner you don’t want to talk too much about tactics otherwise you may be engaged with a conversation you have no way of escaping, especially if it’s a football purist (beware the football purists they are everywhere, they love saying that Italia 90 was the greatest World Cup and they wished the back pass rule was not in effect as they think it’s introduction killed the game). Also if the conversation moves away from the World Cup and onto local football, be ready to suggest that European Football is much better than the A League. Nods of approval will swirl around the room and again your football cred will rise.
Do Not Join the Fanatics or Green and Gold Army Supporters Group
Joining any of these supporters group is the worst thing you can do. All it will do will is put you in direct contact with more Band Wagoners or football purists. Plus the proper football fan is independent of any groups or commercial entity that profits from football supporters groups. If you are at a World Cup football party make sure you make a comment about this and it’s what you truly believe in. Again your football and indie cred will rise.
So by following these simple guidelines you football experience will be enhanced and who knows you may even enjoy yourself and may have found a new love for the beautiful game. Well till the next World Cup anyway..........
Posted by A Football Story at 5/07/2010 12:34:00 PM