You can't get past the Germans. Die Mannschaft killed Argentina's and many neutrals (including this not very neutral Messi lover) World Cup dream. You can't be a neutral and support one team. That's not very neutral. When it comes to Germany and football, you can't be neutral! (As many countries during World War Two found out.)

Okay got the obligatory WW2 joke out of the way, time to praise Germany.

Ahhh Ze Germans. They have the best beer, the best cars, the best war uniforms, the best chicken schnitzel I have ever tasted, they probably speak English better than you or I will ever be able to, they are the best at the back handed compliment, and after winning the 2014 Brazil World Cup, they now have the best football team.

Judging by the post match celebrations, they even have the best looking girlfriends as well, just to top it all off.

The Germans may not have the best player in the world. They don't possess a star like Messi, Ronaldo, Neymar or Robben. Their players aren't the fastest, or the best dribblers. But they are the best at the basics.

At this World Cup they did have the best goal keeper, the best defence, the best midfield and arguably the best attack. If you beat Brazil 7-1 and Portugal 4-0 there's probably no argument!

Their goal celebrations are nothing to write home about, Colombia wins that by a Tango and they definitely didn't have the best dance moves if you caught their hokey pokey dance moves after the game.

But you don't win World Cups by being the best at dancing or celebrating, you win by having the best team and best squad, and Ze Germans did have both of those.

Dear me, it's hard talking up Ze Germans. Almost as hard as knowing where to put the commas correctly in my blog entries. It's a trial I tell you. The grammar police are always on the lookout. I like to write like I talk, without breaths, and in long-winded sentences. Don't blame me: the education system in my day didn't really focus on grammar. Perhaps I was day dreaming during the grammar component.

Yes, yes yes, the Germans had the best team and all that, but they probably had the best luck as well. They were Nervous Nellie's against Ghana, the USA and Algeria. They had luck in the semifinal too! Sure they scored seven goals to one but what luck to face Brazil without Neymar and Thiago Silva. Who without that duo imploded and suffered brain explosions.

Die Mannschaft were also fortunate to be facing a tired Argentina in the final. Who it must be said had a day's less rest to recover from. The Germans cruised in their match against Brazil while the Argies played a gruelling semi-final, where they were kicked by the Dutch for 120 mins.

Before the game I had a World Cup final discussion with my cousin Andrew. It centered on our desire for an eventful World Cup final. Usually the final of any major tournament is a drab affair. Some previous World Cups have been utter stinkers.

For the perfect final, the ideal situation is a close game, with lots of goals and a last minute winner enveloped with plenty of football commentary segues. 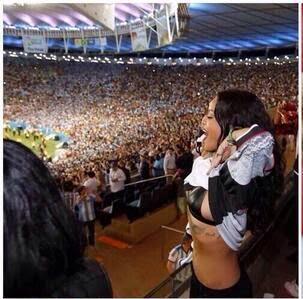 You have to put with some boring bits, but you were rewarded in the end with a bit titillation.

Speaking of Rihanna, did you see her flash at the World Cup Final?

I totally farked up my final viewing by sleeping in. I woke up with 25 minutes of play left remaining. Lucky I recorded the game on Foxtel IQ, so after the game ended, I went back like a good football writer and watched the first 75 mins I missed.

I don't want to fake it Dear Readers!

Lucky I do have the option of recording because the first 75 mins apart from the goal were probably the most entertaining part of the final.

Argentina Messied up most of their chances during the final, I counted three clear cut opportunities. Argentine striker  Gonzalo " missed a great Gonzalo scoring opportunity Higauin " butchered a great chance in the first half. He wasn't on his own though, Rodrigo Palacio who replaced Higauin in the second half also missed a great chance.

And of course we can't forget the most glaring miss of all that the Argentine's had. The one from Messi, the little genius butchered the Argies best chance early in the second half.

Some English commentators are digging in the knives saying Lionel Messialot and his coach Alejandro Saballa were not on best terms. Post match they were talking up a rift between the star striker and Saballa, because they saw Messi walk off early when the Argies were in the middle of a team huddle before the game. I sense some English commentators are still traumatised from the hand of goal in 1986 with regards to that talk I reckon.

Still Messi tried his best, they way he controlled the ball to set up the offside goal to Higauin midway through the first half was sublime. Messi is no Maradona, he couldn't dominate like his fellow number 10 did in 1986.

Messi doesn't have the leadership qualities, anger, crazy and drugs inside him that Diego had. His genius is on the quiet, humble side rather than the crazy alien genius that lived in Maradona.


So Mario Göetze is better than Lionel Messi now? That's according to German coach Joachim Löw. Jogi Bear reckons that's the case after Göetze scored the winner. These abstract declarations are fair enough, the winners can write their own history.

I'm glad it was a moment of quality that decided the final rather than a penalty shootout. That goal rounds out the top three goals of the tournament. It's been a volleyathon! Tim Cahill's volley against Holland is number one, James Rodriguez volley against Uruguay is number two and Mario Göetze's volley in the final against Argentina is number three. 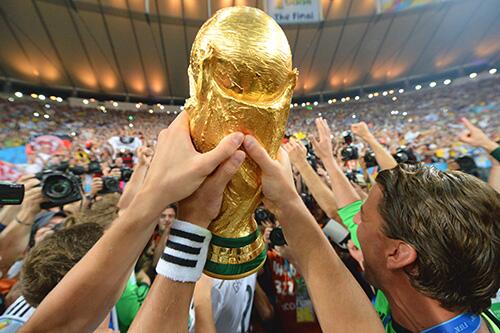 I've absolutely loved this World Cup. I love that band wagoners, casuals, purists and even the fame lovers come together to feast on football for a month.

Where else do you get an event besides a World Cup final that unites the world?

(photo above by Ryu Voelkel  @toksuede)

Let's applaud Ze Germans for their triumph and skill in winning the 2014 World Cup. The rest of the world has four years to beat those great @ English speaking, funny dancing, back handed compliment giving, great at tournament football, bastards!