The 2014 Socceroos Brazil Squad and A Football Story

Over the years here @ A Football Story I have brought you some interviews with young Australian players some known and some unknown. Three of the players I interviewed made Ange Postecoglu’s final 23 World Cup squad for Brazil.. They are attackers Mathew Leckie and Tommy Oar and defensive youngster Bailey Wright.

I interviewed current Socceroo Mathew Leckie in 2011 and it was featured in Soccer International a magazine I grew up with and one that sadly no longer can be found on the newsagents stand due to the rise and march of technology.

The interview with the Frankfurt winger was published on this blog in March 2011 when he was still playing with Adelaide United.
Mathew Leckie is now a key attacker for the Socceroos. Ignored under Holger Oscieck he has flourished under Ange Postecoglu and all Socceroos fans hope and some even expect him to be a danger to the opposition when he plays at the World Cup in Brazil.

Expect Mathew Leckie to be in Ange Postecoglu’s starting line up for the first game against Chile. His speed determination and ability to get on the end of balls in dangerous position will be a key factor for the Socceroos in attack. Like the rest of the Socceroos fraternity we all hope Mathew can cause a surprise or two in Brazil. 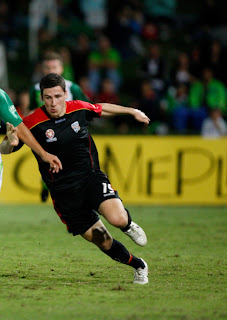 Here is a link if you are interested here

I interviewed Tommy Oar in the middle of 2011 and it first appeared on the Green and Gold Army website after he scored a screamer of a goal for the Young Socceroos at the Youth World Cup. By then the Utrecht attacker was already a fully fledged Socceroo and completed his first season in Holland.

In his first season at FC Utrecht the former Brisbane Roar winger played against Liverpool and played a fair few games for his Dutch side making him a rare Aussie Abroad success story. His star has been rising with each season and he is now a crucial member of AP’s side, a big difference from the sporadic appearances he made for Holger Oscieck often coming off the bench.  A modest footballer he can be used on the wing or as was shown against Croatia in the pre- World Cup warm up friendly in the central attacking midfield position a role he often takes up in Holland.

Of all the players in the Socceroos starting line up Oar will have huge expectations on him. Here is a response to the question I asked Tommy how he managed to deal with each step in his career so far:

"I was fortunate to be given the opportunities to get me into the position I am now. I think no matter which level you are playing, the basic principles stay the same. You just have to worry about your own game and the reasons why you got there in the first place” 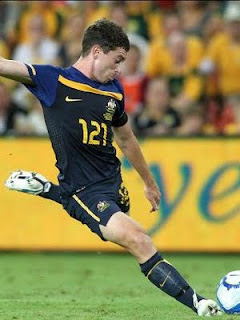 The next step for the Gold Coast youngster will be the biggest stage in football: The World Cup. Can Tommy step up to another level yet again and make a name for himself? I think he can, and so do a lot of Socceroos fans.

Here is a link to the interview here To many people in Australia when Bailey Wright’s name was announced by Ange Postecoglu for the 2014 World Cup squad many ardent and studious supporters had never heard of the Preston North End defender before.

No one expected him to make the final 23 man squad for Brazil either. But there he is mostly as a back up for the defence. The versatile defender will be there just in case injuries or suspension hit the Socceroos back four and he can play as a center back or fullback.

I started to notice the Melbourne born 6 1/2 youngster due to Damian Davies Aussies Abroad monthly reports where he was getting rave reviews for his performances for Preston North End. The interview I did with Bailey first appeared on the Australian 442 website around April 2012.

One very interesting point about the Dandenong Thunder  junior was that after not having much luck in Australia getting a contract he almost quit the game.

“I was fortunate enough to have been offered a two year scholarship with Preston. The reason the trials came about was because I didn’t see much of a future for myself in football in Australia and had talked to my family about quitting football and taking up a trade or to go and work with my Dad which at the time I was already doing.

My Dad said to me would you like to give England one last chance before you threw it away?, so I did and now the rest is history, so I owe a lot to my Dad for giving me the chance to come over.”
After almost quitting the game altogother the Socceroos defensive back up is living every footballer’s dream attending and possibly playing at a World Cup.

I really enjoyed interviewing Mr Wright as it was a quite different process from most of the interviews I have done over the years. Normally the process of interviewing players is through a media officer or the player’s agent. But with the 21 year old I contacted him on Facebook and spoke to him personally.

The Melbourne youngster is one of the youngest players in the Socceroos squad and I found him to be an open and honest person. He is a hard working determined footballer and even if he doesn't get to play in Brazil the experience of just being there and training with the squad will provide him invaluable experience that will pay off for Bailey and the Socceroos in the future. Will Bailey play a part for the Socceroos in Brazil? Let’s see what happens in Brazil said the Monk.


Here is a link here