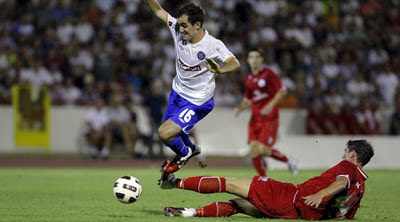 You have had a pretty eventful start to your football career in Europe, scoring on your playing debut, facing teams like  Barcelona, playing in the Europa League and experiencing a fierce local derby Derby tell us about your European odyssey so far?  It’s a far cry from playing in front of a dog and an esky at the Gold Coast?
Playing for Hajduk Split is a dream come true.Playing against my other favourite club Barcelona in Hajduk’s 100 year anniversary game was a fantastic feeling.

The derby against Dinamo was something else. I now know what the word derby really means. Each corner of the city of Split was covered with Hajduk banners and flags, nothing else matters here.

There was a media conference held every day for the entire week before the game. The print media coverage of the game would fill the entire edition of the Gold Coast Bulletin. 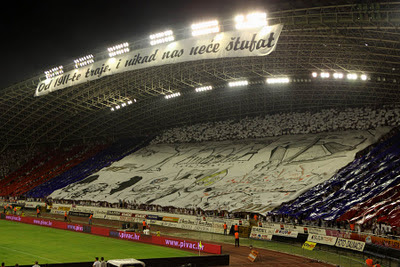 Match day was something i have never experienced in my life.The choreography in the stadium set up by the ‘torcida fans’ is indescribable. For the full 90 mins they did not stop singing and chanting.
When we scored, I thought the place was going to explode. You need to go on youtube to fully understand the atmosphere of the derby. 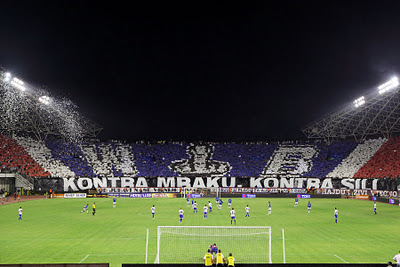 You made headlines in Australia when you signed for Hadjuk Split.   Particularly   The “who is Miron (Bleiberg) ”  comment about your former  coach obviously you have moved forward but you must feel like you have proved some of your critics wrong?
My aim was always to play football at the highest possible level. For me its not about proving anyone wrong, I set my goals high and believe in my own ability.


Not a lot of young players who go overseas are able to make such a great start to their career how did you view the challenge of making into the first team and what goals did you set yourself this season?
My goal was always to break into the first team. It probably happened sooner than i expected, but now the challenge is even greater, and that is to maintain my starting position in the team.


Soon after you signed, you were caught up in a club vs country battle that saw you miss out on the youth World Cup. Did you see any of the games and what did you make of the team’s performance and results?
I watched all the games on TV here live. Unfortunately we did not make the second round. However i know all the boys gave their best and there were some good performances.


How have you viewed Hadjuk’s Start you are in second place behind Zagreb at the time of  writing?  Have any team mates impress you so far?
Our start to the season has been good and we are still currently second behind Dinamo Zagreb.
Our team is very young and there are some good Croatian youth international players. Our Captain Srdan Andric and vice captain Ljubo Milicevic have great experience and leadership qualities. 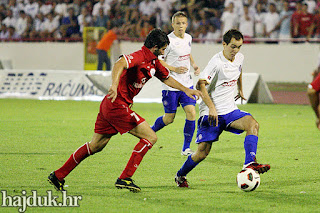 Have you spoken to FFA Technical director Hann Berger or anyone at the FFA about the comments he made about your decision to miss the Youth World Cup? When asked if it would affect your national team chances now or in the future he said: "I think so. Holger gave a clear indication of that by not selecting them for the Serbia and New Zealand (Socceroos) games recently. They are young players and it's difficult for them. What will happen for the future, we will have to discuss internally." What do you think of those comments and have you had any contact from Holger since then?
I have not had contact with anyone at FFA after my decision. I can understand their disappointment with my decision, but im sure they also understood the position I was in at the time.


Brent McGrath and Mathew Leckie were in the same situation as you and all three of you have made great starts to the season. I’m sure all three would have loved to have played for Australia at the Youth World Cup. What were your feelings at the time?
Not electing to go to the World Cup was the hardest decision i have had to make so far. I set myself that goal many years ago, unfortunately the timing of the tournament was not right.


How do you feel about representing the Socceroos? Playing regularly In Europe must give you confidence of a call up sooner rather than later.
It would fulfil another goal of mine to be selected for the Socceroos, however I would need to be performing consistently well at a very high level before that would happen.

Has having Croatian background helped you settle in easier? Do your teammates view you as a foreigner or one of the gang?
Yes, my Croatian heritage has helped me settle in well. I speak Croatian and understand the culture and this has enabled me to feel at home.


How is fellow Aussie teammate Ljubo Milicevic doing? He hasn’t played much in the last few weeks - what’s he like on and off the pitch?
Ljubo has played in the last two games including the derby against Dinamo and was captain in the last game against Cibalia. This shows how highly he is regarded by our coach Balakov.
On the pitch he is a leader, off the pitch he is well liked by everyone.


Who are your friends in football and would you say is your major influence in your career?
The major influence on my career has been my parents. My family is very important to me and without their support and guidance i would not be where i am now.


Tell us your thoughts on the A-League. Even though Miron did not use you often, did the experience playing in the Youth League with Sydney FC and then with Gold Coast United help you in getting a chance with Hadjuk Split?
Obviously my time at Sydney FC and Gold Coast United assisted in the development of my game.
I believe my time with the under 20s was also beneficial as it exposed me to international football and some of the best players in the world from my age group.


What is a usual week for you? Can you give us an insight into a week as a player for on and off the field for Hadjuk Split?
Training is either once or twice per day depending on match day. Times of training vary. After morning training we have a team lunch and if we have training in the evening we have dinner together.
Our training schedule can also vary between home games and away games. For the derby against Dinamo we went into camp on the island of Brac four days before the game even though it was a home game.

On other home games we go into a hotel on the day before the game and stay as a group until match day.
Usually we only have one day off during the week and i use this time to relax with friends and go to the beach which is walking distance from my apartment.
I have also had a lot of friends visit me from Oz this year and i have used my days off to meet up with them.


What kind of person are you? Describe yourself in a few words?
Ambitious, determined, loyal.


What are the main qualities you have as a footballer?
My fitness, willingness to learn and commitment to the game.


Canberra journalist Eamonn Flannagan would kill me if I don’t ask you about the effect that Canberra had on your footballing education. And what about an A-league team for Canberra - what do you think?
Without an A league team in Canberra there is no future for young players there.
I had to leave home at 17 to chase my football dream. It would have been so much easier if Canberra had a team.
My club Canberra Deakin had a massive influence on my football education. It exposed me to the technical aspects of the game from age 6. It is where i fell in love with the game and began dreaming of a life in professional football.

Canberra Deakin fully supported my move to Hajduk Split and were the first club to sign off on my transfer to Europe. I will never forget that.