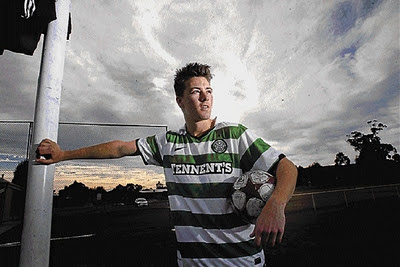 Here is an interview i did with young Aussie Jacskon Irvine.
first published on 442 Aus website
Can you give us a rundown on your time in the Scotland?
I have been fortunate to play in many European tournaments, in many countries, against many of the worlds biggest teams. I’ve been lucky enough to play against teams such as Borussia Dortmund, Boca Juniors, Liverpool, Aston Villa, Sunderland, Wolfsburg, FC Basel, Real Mallorca, Ajax and Tottenham Hotspur.
I was also involved in the Scottish Youth Cup Final in May. A Celtic-Rangers Old Firm final attracted a crowd of 10,000 at Hampden, Scotland’s national stadium. We won 2-1 after extra time, an amazing experience.
The most exciting opportunity I’ve had is to be a part of the NextGen Series, a youth Champions League style tournament including the best of the best of Europe’s elite. Our group consists of Marseille, Manchester City and world champions Barcelona. If we manage to qualify through our group we will be joining the winners of the other groups in Abu Dhabi in January for the finals.

You are a former Endeavour United and Knox City junior and had a short spell with Richmond’s youth team. You also played for Southern Blue Tongues in the Victorian Champions League summer competition. What was it like playing youth football for those teams?
My times at Knox and Endeavour were really great for me and the stage of my development I was at.
I was at Knox City from the ages of 10-13 and Endeavour at 14 and 15 and the most important thing for me at that point was that I was enjoying myself and that I had a good group of boys in my team as well as trying to learn about the game.
A big step for me was playing in the summer league with Southern. Was lucky enough to be captain of the under 18s at the age of 15 and we managed to make it to the final. My time at all of these teams was greatly beneficial to me.
Richmond was not a great time for me, I was 15 trying to get a spot in the under 21s which was a difficult task and I found myself on the bench and sometimes not even in the squad for most games. At such an important age it’s not about what league you play in, it’s just important to be playing regularly. So just before my 16th birthday I made the switch down a division to Frankston.

2009 was the big year for you.  You joined Frankston Pines in Victoria’s State League Division One. You were coached by Tommy O’Halloran and after just one game in the reserves against Northcote you were promoted to the first team and then won the club’s best and fairest award and the players’ player-of-the-year trophy. What was that year like?

My year at the Pines was the biggest step I made in football. Tommy signed me and gave me my first game in the first team just a week after joining the club. A full season of playing against men, many of which had played at the highest level in Australian football, was a massive step for me and I was fortunate enough to gain the rewards at the end of the season.

After your great year with Frankston Pines you got a trial with Melbourne Victory and after one game you were off to a trial with Celtic. What was it like trialling with Celtic and what was the pressure like?
The Melbourne Victory coaches came to watch one of our games against Bentleigh Greens and I was lucky enough to get a phone call later that week inviting me to come and train with the youth team.
Unfortunately due to some FFA rules involving age restriction and players that haven’t been developed in state academies like the VIS, I was only able to make one appearance. It was actually my Frankston coach Tommy who organised my trial at Celtic.
I was there for 10 days in December 2009 where I did four or five training sessions and played in two friendly games, after which I was fortunate enough to get offered my first contract. The pressure was actually not something that worried me, because I was just one of many trialists all I could do was try and show something a bit different. I wasn’t expecting any miracles, just wanted to take the opportunity to train with some of the best players and coaches in Europe.

What is it like living in Scotland and how do you quell the homesickness?
I really like it here in Scotland, I have been living for quite a while now so I am used to this way of life. It isn’t as different from Australia as some people might think, at least they drive on the same side of the road!
Homesickness was very hard to begin with, especially after only a month of football I found myself with and ankle injury that had me on the sidelines for nearly four months. I’m lucky enough to be able to have my parents over here for a two or three months a year and I get to come back to Melbourne for Christmas so that is always good.

How did you get used to the professorial environment in Scotland and what were the differences to level you faced in Australia?
The difference in the standard of football was probably one of the toughest changes I faced when I made the move. The tempo of the training and games was something it took me months to get used to.
Considering the majority of players at the club are full Internationals for their respective countries, you can imagine how the first few weeks were for a kid from state league one in Melbourne trying to keep up!

What do you hope to achieve in your football career?
I’ve been very lucky to achieve many of my short term goals for this season already, including securing a new contract and playing International football. By next season I’d like to either be in and around the Celtic first team or be out on loan playing first team football at another club in the UK or Europe. In the long term I’d like to continue being included in the International scene and try and establish myself at a high level club as a regular first team player.

There are a lot of young players like yourself that are going straight to Europe and bypassing the A-League.  What advice do you have for young players who want to follow your path?
In my opinion the most important thing for young players in Australia that want to establish careers in Europe is to stay focused and committed, and don’t believe that the only way you will obtain such an opportunity is through FFA-based academies and select squads.
I was never selected for any state teams and I was turned down by the VIS at a young age. Just keep trying to play regular football, and if you are committed and have the talent you will get your opportunity at some point.

What kind of person are you?
I’d say I’m a pretty laid back and outgoing person, a bit shy at times as well. I’m a bit of an individual as well, the boys aren’t massive fans of my clothes and my music!

What is a usual week for you at Celtic?
A usual week consists of training in the morning and going to the gym in the afternoon on a Monday, Tuesday, Thursday and Friday, with our games on Saturdays and usually a pool recovery session on a Sunday. Wednesdays we go to college.

You can play right back and as a midfielder what position do you play at Celtic and what do you prefer to play?
I was always a centre midfielder from a very young age until my time at Frankston where I played most of my football at full back, right and left. After I returned from injury at Celtic I began to play a lot of football at centre half.
I then made the switch to right midfield and eventually got my chance at centre midfield and I have managed to keep that spot since then. Although some injuries and suspensions this season have meant I’ve played a few games at centre half. Overall I see myself a midfielder and that is where I like playing my football the most.

How is it watching the first team train and what do you have to do to make it in the first team?
The first team has some terrific players, we have Internationals for Scotland, Ireland, Sweden, Greece, Wales, Israel, South Korea and Honduras. I’ve been fortunate enough to train with the first team several times, and they have been some excellent experiences. The pace of the game and their passing and movement is truly another major step above even youth level.

Which Celtic players have impressed you?
We have some extraordinary players in our youth team this season. Some players that have stood out for me since I have been here include Filip Twardzik, Marcus Fraser, Paul George and Callum McGregor.
Filip has made several first team appearances in friendlies, is a full Czech International at U19 level and is one of the most technically gifted I have ever played with or against. Paul just recently made his full first team debut in the Scottish Cup, he is also a full International for Ireland at U19 level and is one of the most skilful players I have seen.
Marcus and Callum both played with me in the U19 European championships for Scotland and are both truly gifted footballers. These are 4 names I would keep an eye out for!

Has anyone at Football Federation Australia contacted you about playing in Youth Tournaments?
I have been contacted several times by the FFA asking me to play for the U18 and U19 national teams. It has been a complicated situation for me as before I was approached by Australia I was approached by Scotland, who I am eligible to play for through my Scottish father.
I jumped at the chance to play International football and I travelled to Slovenia to play against Wales, Belgium and Slovenia in the European Championships. One day I would love to play for Australia and I hope they continue to invite me to be a part of their International set up as it is something I have always dreamed of doing.
Posted by A Football Story at 11/03/2011 12:26:00 PM