Here is the full interview with Tommy Oar that appeared on the Fox Sports Website on September 04 2014
http://www.foxsports.com.au/football/socceroos/tommy-oar-reflects-on-missed-chance-against-holland-and-world-cup-performance-ahead-of-belgium-riendly/story-e6frf4l3-1227047795442 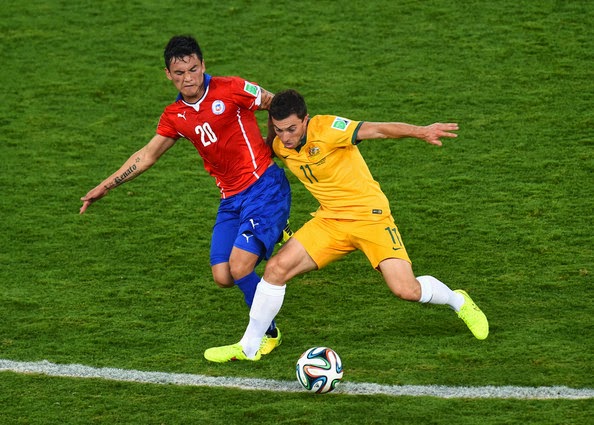 1) Hey Tommy, it’s been a while since we last spoke, a lot has happened since then, the first question is obviously about the World Cup, what was the overall  the experience like?

The  World Cup was an amazing experience. It is the highest level a player can reach in there career, so to get the opportunity to play three games was fantastic.

2) The first time you stepped on the pitch to play Chile it would have been one of your boyhood dreams come true; what were the emotions?

A combination of nerves and excitement. The occasion probably got the better of me in this game, but I felt that as the tournament went on I performed better.

The Socceroos fought back in second half it must have been frustrating experience not to equalise and then conceding a third goal late?

Obviously disappointing to start our world cup in such a way. Put us completely on the back foot. I thought we showed great character to come back, and were unlucky in the end not to get a result.

4) For many Socceroos fans the Holland game was unforgettable, many fans felt like it was a win rather than a loss, bit I suspect for the players it was heartbreaking.

Tell us your feeling about playing Holland? You were up against many players that you come up against in the Dutch Eredivisie?

The Holland game was the one I was most eagerly anticipating. Obviously playing against a lot of the players from there was strange, and I knew exactly what to expect from their play.

I thought we performed really well and put them under a lot of pressure.

I think on a different day, we would have won the game.

5) Talk us through the Holland game key moments. From Tim Cahill’s spectacular goal that brought the  equaliser to Mile Jedinak’s goal to go ahead if only for a brief moment and your cross to Mathew Leckie.

Many felt you should have taken a shot instead of crossing, looking back now how do you feel about that moment? What was it like out there on the pitch?

I think the difference between the two teams on the day was taking chances. Van Persie, Robben and Depay had one chance all game and all took it.

Timmy scored an amazing goal, and I think we had a few moments in the game where we perhaps could have scored, mine obviously a major one.

If I had shot and missed, people would be criticising saying I should have squared it so it’s a tough one.

There is no doubt I should have done better, however, If I had my time again, I think I would've taken an extra touch and given Leckie a more friendly pass.

6) How do you feel about your performance at the World Cup?

Mixed feelings. Obviously playing at the highest level, coming up against the best defenders in the world is always going to be tough.

I’m disappointed I couldn't have a more positive impact, however I am grateful for the experience.

It has highlighted for me the things which I need to work on and what I need to improve.

7) Your World Cup experience gave you the opportunity to play against Croatia, Chile, Holland and Spain these are world class teams what did you learn from the experience?

When you get to such a level, I think the differences are the small details. Looking at how the Dutch, and the Chileans, took advantage of the chances they had in the game, they had the killer instinct which is something I lacked in the tournament. 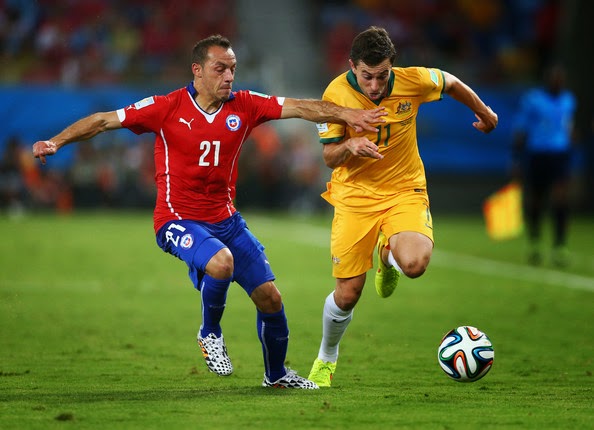 Having said that, I think we had a brilliant preparation and left no stone unturned.

The coaches gave us all the tools we needed to be successful, and this allowed us to take the game to world class opposition for periods of each game.

( photo Marcelo Diaz of Chile and Tommy Oar of Australia battle for the ball during the 2014 FIFA World Cup Brazil Group B match between Chile and Australia at Arena Pantanal on June 13, 2014 in Cuiaba, Brazil.Source: Clive Brunskill/Getty Images South America)

I think after the first game it was mixed feelings. We fought back and performed so well, but couldn’t help but wonder how it might have turned out if we didn’t have such a nervous start.

The second game was obviously the hardest to swallow, as it was the game that ultimately knocked us out of the tournament.

9) Holger Osieck was sacked after poor results against Brazil and France what was the feeling like it must have been hard to go through that?

Of course It was a difficult and uncertain period for all of the players. No player likes being on the back of such heavy defeats, but I think all the players were still surprised.

Ultimately I think it had a good effect on the team, and nobody took there place for granted in the squad.

10) What can you tell us about Socceroos Coach Ange Postecoglou? He seemed to turn around the Socceroos mentality it showed against Costa Rica and Ecuador what style he wanted to play tell us about the influence he had on the team leading up to The World Cup?

He has a very positive effect on the group and has the ability to get the best out of his players.

He demands for the whole team to maintain their highest standards which creates a healthy competitive atmosphere.

As I mentioned, he always manages to get the best out of his players, not only tactically, but also psychologically.

11) We saw that the Aussies had a good bond during the World Cup can you tell us any stories that occurred in camp? Who were you closest to in the squad?

I think it’s a very healthy team atmosphere in the team, and there are no real divides.

Everyone gets along well with everyone. However, there are some players who I have known for a long time, such as Matt Mckay and Ben Halloran.

Obviously was disappointing to end the world cup with an injury. I was fully fit the entire tournament but it was one moment where I tweeked my knee. After 10 weeks of rehab, I made my first appearance since the World Cup yesterday against Feyenoord.

13) What are your thoughts on the Asian Cup in January you must be looking to build on the World Cup performance do you have ambitions to win the Asian Cup on home soil?

There is a lot of football between now and then. Of course it is in the back of everyone's mind, and it is something which all players will want to be involved in.

With another six months preparation between the world cup and then, I think everyone is confident we can take our game to a new level, and be a serious contender to win.

14) Your Eredivisie career has seen you play over 80 games for Utrecht FC you must feel like you belong in Europe now?

I think the one major difference between the Eredivisie and the A-League is the depth of the teams. It is difficult to get that feeling of ‘belonging’.

You know that if you don’t perform for a few weeks in succession that you will lose your place.

I am fortunate to be gaining more experience in a fantastic league, but it’s important to never get complacent.

16) Looking back on your time with Utrecht FC what moments stand out?

In my first season here we played in the Europa League, playing the likes of Celtic, Liverpool, Napoli etc which was an amazing experience. Also in my third season here, we had a great year and finished with the most ever points in a season for Utrecht.
17) Last season Utrecht finished 10th and the season before it was fifth. Was it a case of Utrecht overachieving when it came fifth? What are your thoughts on how the team did and your own performance last season?

I think everyone involved in the club was disappointed with how it went last year. Looking at the quality of our squad, we are a side nobody likes to play against.

Last year was a case of dropping to many points, particularly away from home. This year we have started very positively and are playing with a renewed confidence.

18)  Any truth about any recent transfer rumours linking you with clubs like Udinese? Do you have ambitions to play anywhere else in Europe? The English Premier League for example?


I am a very ambitious person and want the best for my career. However the Eredivisie is a fantastic League and I am very happy at FC Utrecht.

I have one year remaining on my current contract and am fortunate enough to be getting regular game time. If something came up I would see if it was the right step for my career.
Posted by A Football Story at 10/13/2014 02:18:00 PM