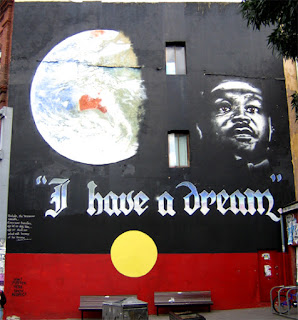 There is a world famous Mural in King Street Newtown Sydney which is adorned by a huge portrait of Civil Rights legend Martin Luther King featuring the infamous  “I Have A Dream” line  from one of his speeches. Recently a companion piece Mural was added with the words “we have the dreaming”. It’s two Murals having a conversation with each other.

We have the dreaming pic found 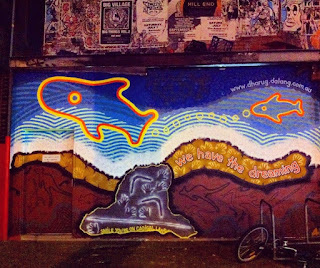 MLK mural pic by jesstheres
No disrespect to both Murals but I think another Mural should be added add to the conversation with the words and picture of a certain little Italian number 10 that says: 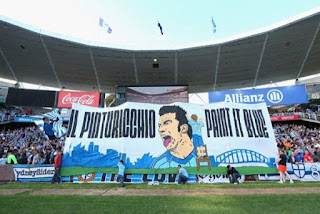 Some Points from the Sydney FC/ Western Sydney FC Derby


Western Sydney is the Socceroos Factory

Alessandro Del Piero has slow feet but a fast mind. He has been carrying the Sky Blues so far this season and he will do the same for Sydney FC against Perth Glory for ADP’s 800th game.

Someone needs to warn Alessandro Del Piero about Jacob Burn and Steve Pantelidis both players have a tendency to dive in early and often.

I wonder like Wellington Phoenix if Perth Glory has a raffle going in who can butcher ADP and get away with it the most?

Imagine a Billy Mehmet type player for Sydney FC? The Perth Glory Striker is dangerous in the box with his feet and head. It’s a novel experience watching an endangered species take the field and score goals like that.

Paul Reid has the midfield ticking for Sydney FC. Ali Abass is wasted in DM and the Striker issue seems to be the running gag at Sydney FC this season.

But all that is prelude to what Alessandro Del Piero will do next.