There have not been queues like this in SYDNEY COVE since Captain Cook and the First Fleet landed and decided that even though Aborigines had been here for 40, 0000 years they didn't really exist. The buzzzzzz around the Sydney Football Stadium could be cut with a knife and be used as a gelatin material to keep Mark Bosnich's rebel wig in place. 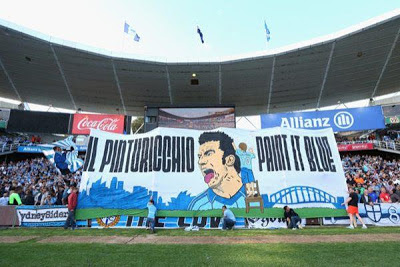 The TIFFO told the story.  Alesandro Del Piero is such a superstar he can make 35,000 Sydney siders  get off their comfortable tanned and manicured arses and don the Sky Blue Jersey that has been hiding in their closet for seven A-League seasons.

I was in the Cove with the best atmosphere and the worst view in the stadium when Alesandro Del Piero scored that free kick. Like a lot of the action when viewed from the Cove end it felt like everything was in slow motion as the ball seemed to float in the air for an eternity before it nestled into the back of the net. When that goal went in 35,000 fans forget their crap jobs, mundane lives and the pre-game arguments about parking to engage in what other sports can never offer: A collective primal scream that shook the roof off its hinges and the wig of Bosnich’s head.

The False Striker
How many times can someone say this? Sydney FC need a decent Striker. it’s the reason why football fans wake up in the morning. Do I have to say it again? It’s to see Strikers Shoot Farken! Won’t they think of the poor football Striker?.

Everyday Strikers around the football world turn up on milk cartons and missing person’s lists kidnapped by over eager coaches who want to take attacking players and turn them into right backs. 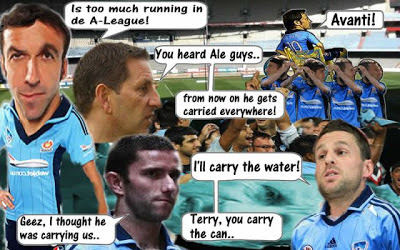 Go to Twitter for more great A-League cartoons. Nothing B League about it. Wayne Snowdon ‏@waynesnowdon
Game Points


Encore
Why do players who come to Sydney FC play below their best compared to whence they came from? And when they leave sin city to a new team why then in turn do they play better for their new club while at the same time sticking up a middle finger to Sydney FC in the process.

Scott Jamieson I’m talking to you.

Bring on the Sydney Derby!