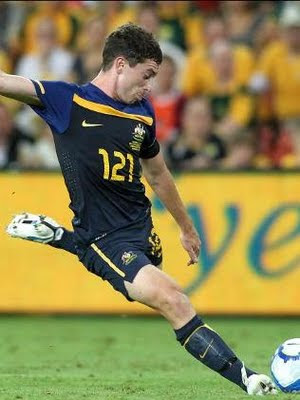 Here is the unedited extended version of the interview i did with Tommy Oar. Here is a link to the GGArmy website where it is edited.

1) Congrats on making the Young Socceroos squad. First of how dare the excitement levels and do you now owe your club FC Utrecht a big favour as they must have wanted you to stay?
Thank you. It is very excitement to be heading to another world cup! Last time in Egypt the results didn't obviously go the way we planned, but if you look at how far everybody has progressed in the last 2 years, and the players that our current team has, I really think we can surprise a lot of people this tournament. As for FC Utrecht, the club agreed with the Young Socceroos staff months ago that I would be going to this tournament. My first goal is to help Australia do as well as possible at the world cup and then return to FC Utrecht and take things from there.
2       2) During your time in the A League the spotlight was on you people were saying things like the next Harry Kewell how did handle that pressure and expectations at such a young age?
You can't take notice of what people are labelling you because you can easily get carried away, and things can also turn around very quickly. I didn't take any notice of that I just try to concentrate on my own game. Although it is flattering to hear these sorts of comparisons, I never took them too seriously as they weren't coming from my coaches, or the people whose opinion really mattered to me at the time.
3) The last couple of steps you have taken have been quite large going from A- league to Socceroos to now playing In Europe .How did you manage each step up?
Everything has happened extremely quickly for me since the last U-20 World Cup in Egypt, I was fortunate to be given the opportunities to get me into the position I am now. I think no matter which level you are playing, the basic principles stay the same. You just have to worry about your own game and the reasons why you got their in the first place.
4)
W  4) What can you tell us about playing for FC Utrecht?
I think FC Utrecht is a fantastic club, and the perfect place to develop. The Dutch League is quite technical and the training sessions are very technical based. The fans are really great and It's a very optimistic club in terms of what they achieve, as they showed last season in the Europa League. I have really enjoyed my time so far at FC Utrecht.


5) Have you had time to reflect about your first season in Europe? Playing against Liverpool and getting a taste of first team action must be making you thirst for more?
My first season at FC Utrecht was a really big learning curve for me. I was lucky enough to get game time against Liverpool, PSV, Twente and also Celtic. I think playing against teams of this calibre taught me a lot about the areas of my game which need improving and also was just a fantastic experience in general. I think I am much better prepared for this year after these sorts of experiences. Hopefully after returning from the World Cup in Colombia I can break into the first 11.

6)   6) Having your Brisbane Roar teammates what can you say has been the most positive and most negative aspect of having a bit of Brisvegas with you in Holland?
Although fairly unique, I think it was a great thing for all of us to have each other move to the same club at the same time. Half the battle in European Football is moving to a new continent away from your family and friends, and to have some familiar faces and friends around all the time is a massive help.
7)  7) Which teammates have impressed you the most and which opponents have caught your eye?
Dries Mertens, a player who recently left FC Utrecht for PSV Eindhoven was fantastic. He is also a Left Winger, although he plays pretty differently to I do, and I think I learnt a lot from his style of play.


8)  8) How do the FC Utrecht fans treat you? Can you walk down the street or do they leave you alone?
The fans have always been extremely supportive to us three on the field and on the training ground. Utrecht is quite a large city, so off the field I doubt many people know who we are.
9)  A lot of Aussie young players talk about the training regime being tougher in Europe. Can you give us an insight into a week at FC Utrecht?
Last year we were involved in three competitions, the League, the Cup and the Europa League. If you compare this to Australia where it is only the League it is a much more intense schedule. The training load I have found is not too dissimilar, but I think that you literally play twice as many games as in Australia (throw in International commitments aswell) so it is much more physically and mentally demanding.


10) Have Kerem Bulut and Bernie Ibinie given you ideas about where they like their crosses? It seems a pretty imposing strike force?
I have been to a few tournaments with Kerem Bulut now and he has a fantastic eye for goal. On top of this, he is strong, quick, and aggressive which are all traits which go a long way. I have not seen as much of Bernie Ibinie, although from what I've heard he has impressed a lot of people and is a handful for any defender. I think they will both, along with Sunderland striker Matthew Fletcher, be great assets in Colombia for our team.
11) Plenty of attention will be on this tournament what do you hope to get out of it?
I think our first goal should be to qualify for the second round. I think it is silly however to concentrate on this, and we should just take each game as it comes. Our first game against Ecuador will set the tone for the tournament and is a crucial game for our team in order to progress to the next round. After being at the last world cup and seeing the standard, I think we definitely have the team that can surprise a lot of people.
12 ) You are playing teams like Spain, Ecuador and Costa Rica what are the team’s chances of getting out of the group?
Spain's credentials obviously speak for themselves. However I think the strength of our team is the harmony within the group, which showed during the qualifiers and was a key reason behind our success. This counts for alot, particularly in tournaments like this and I think everyone will be up for the challenge of playing such a high calibre team. After playing Costa Rica at the last world cup, I think we can expect a mobile, attacking minded team, and we will have to be at our best to get the right result against them.
As for Ecuador, they are quite an unknown quantity, particularly at altitude. We have had some experience against South American opposition over the last few years and I think this will be valuable for us going into our first game of the tournament.


13) How are you away from football? What kind of things do you get up to? Has Utrecht got a decent night life?
Utrecht is a uni-city with an extremely young population. It has many bars, restaurants and is very lively during the warmer months. It also is only 20 minutes from Amsterdam. I am quite a music fanatic, so I spend a lot of time going to gigs in Amsterdam or in Utrecht. Besides that I enjoy playing the guitar, playing FIFA with my friends, going out for dinner. . . just the usual things really.


Growing up, my brothers always used to support Leeds United because of the heavy Australian influence. I guess with that, naturally, my favourite players were always Mark Viduka and Harry Kewell.
15 )I have always been fascinated with how athletes stay on the path? With many distractions in this modern world how did you focus on football when others where partying and doing other things?


I think what it always comes down to is the realisation that there is only a certain number of years in your life where you can play football, It is a very short career. Once you have finished up there is plenty of time to catch up on doing all the things you missed out on Having said that I think everyone needs a balance to there life. You can't just lock yourself away and only play football. It's healthy to have other things in your life as well.
16)  Major influences in your football career.
The biggest influences in my career have for sure been my family. They have always helped me in any way they can to make life easier for me and hence help me on the field.