How to fake it as an A-League supporter 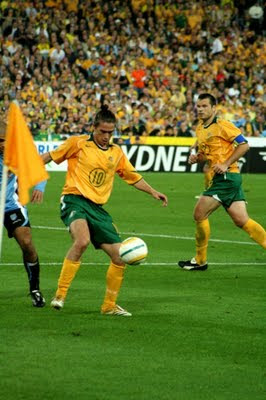 Now that you have heard the news that Harry Kewell and Brett Emerton have signed for Melbourne Victory and Sydney FC you probably just remembered that Australia has a local competition called the A -League. You remember the A-League? Don’t you?
Remember you went to see Dwight Yorke in Season One? Remember the football community all joining together as one where all football religious beliefs were put aside for one harmonious night?
Side by side Euro snobs in Man United Jerseys sat next to local sycophants dressed in Sydney Olympic Jerseys.
Remember as you walked to the SFS to the first ever A-League game asking your friend “Is Dwight Yorke the one that went out with the English model Jordan and wasn’t he also involved in a naughty video with a former Socceroo?”
So now that your short term interest in football has piqued again here is a guide I call ‘How to fake it as an A-League supporter’.
My previous Australian supporter guide ‘How to fake it as a Socceroo Supporter’ helped hundreds  if not  two or three would be football fans. So If Rebecca Wilson can fake it, so can you!

Should I join a supporters group?
If want to see Harry Kewell be wary of the Melbourne Victory protest movement. Victory fans like to do a lot of protesting. So some games you could be involved in a silent protest, a banner protest or my favourite: the turning you’re back on the game protest. They don’t have the nickname “tards” for nothing.
What Clothing Should I wear?
Sarcasm alert! You should wear Premier League club colours — there is nothing cooler than wearing a Manchester United jersey at an A-League game.
After deciding not to wear you ironic Che Guevara t-shirt, you decided to shit all over the A-League with your colonial inspired soccer shirt.
Bandanas? Keep them at home hipsters. Actually hipsters should stay at home period. Gen-Y should probably skip football altogether. There are periods where there is not much happening. Modern football is mired in midfield mediocrity and now and again someone might shoot but that is because they smoked pot and forgot the coach’s instruction to keep shape and pass it only left or right. The pace of the game will fuck up you’re A-D-D wiring, but you probably have your iPhone to play with when you get bored so actually you might be okay after all. But just leave the bandanas at home.
What do I chant?
Now that Kevin Muscat has retired you are probably thinking the "fuck off Muscat" chant will be consigned to the chant bin. But buck up little camper, Musky is still going to on the bench as assistant coach.

If you are Sydney fan it will be a real treat to use the “what a waste of money” on an opposition player  for once.

And what about booing? Yes that joy that only an overweight and uncoordinated member of the public can get for booing a professional athlete who has played the game since they were two years old.

Who Should I blame if my team loses?
Blame Rebecca Wilson? Maybe, but the more obvious target is the referee... hang on… make that the coach. Usually your team will lose because the striker missed a bunch of chances or the defender fell over at the wrong time. An actual goal scored by teamwork or individual flair is rare, so if your team loses because of the others team’s skill, you are obliged to ignore this and again go for the referee or the coach — either is acceptable. Note: Never admit the other team was better than yours.
What about the Coaches?
The best teams do not need coaches to win, while the poorer teams need coaches to stop the best teams winning. This is modern football, but the most important decision a coach can make is what they will wear.
If the coach wears a suit he is a tactician with very complex ideas about moving one player a little bit upfront and one player a little bit behind. Most tacticians don’t really like football at all. They don’t really like footballers and they hate the fans even more.
What they love seeing is a plan in action. They would rather the game be won through their coaching acumen than players individual skill and passion.
The other kind of coach is the one in the tracksuit. He is a motivator rather than a tactician. At half time he will give players the hair dryer treatment, a kick up the back side and then he will say things like “you can do it” or when you get in front goal “shoot farken”!
Football Jargon
Be careful if you are a new fan. A level of faux sophistication has entered the game. Words and phrases like tactics, inverted wingers, fake number nine's and holding midfielders have infected the football discourse and it can be confusing.
Here are two of my favourite football words:
Striker: Used to be a really important part of the team. Often teams used to have two, sometimes even three strikers on the pitch at the same time. Today the striker is becoming extinct. More than half the world’s strikers have disappeared off the planet only to be replaced by a holding midfielder.
Wall: The only real job in football is the wall. You will always hear a commentator say that “the wall did its job”.
So there you have it the complete guide to How to fake it as an A-League supporter. Bring on Season 7!
Posted by A Football Story at 8/31/2011 06:46:00 PM