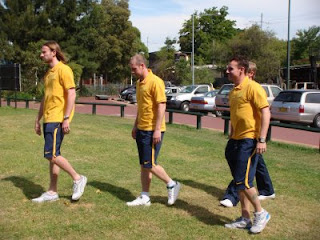 With memories of Francesco Totti's heartbreaking penalty still lingering, the Socceroos have demons to exorcise on the world stage.


On Saturday afternoon I arrived at a park in Parramatta where Socceroos captain Lucas Neil and arguably Australia’s greatest ever footballer, Harry Kewell, were playing around with the kids from the Granville Waratahs football club.

One of the kids was nominated to perform a few tricks for the cameras, so the team surrounded him and started chanting “Darrell, Darrell” as he tried a few keepy-ups before moving into a wonderful seal impersonation, expertly keeping the ball on his head for a few seconds.

It was there that the unveiling of the new Australian Football Awards - where Football Federation Australia (FFA) will recognise players at a professional and non-professional level, as well as volunteers, coaches and referees - took place.The Professional Footballers’ Awards (PFA) were announced as well, the PFA Footballer of the Year and the PFA Harry Kewell Medal, which will be awarded to Australia’s best young footballer.

It was almost a surreal experience. I have watched Kewell live and through a television screen for years; I was there in Melbourne in 1997 when an 18-year-old Harry put Australia 1-0 up early in the game against Iran.Australian fans know what happened later that evening.

If events shape history then that game was the catalyst for the success the Socceroos enjoy now.

Perhaps with memories of that fateful night, the Galatasaray star was cautious when talking about the World Cup qualifier against Uzbekistan on Wednesday.

"Strange things do happen in this game and if I have learnt one thing from my career it's to take nothing for granted until its won or earnt," Kewell said.

And don’t Socceroos fans know it?

While all the kids' faces were beaming from joy at meeting their idols, I was struck by just how well-behaved they were. They weren’t being pushy for autographs, and they managed to keep the secret that they were going to meet their Socceroos heroes to themselves.

In fact, as I left the park after the Socceroos had finished with their commitments, it was the parents that got a bit excited - the sight of a mother chasing Kewell in the car park for an autograph will be kept with me for a while.

It’s no surprise to see them go a bit gaga over our Harry.

The Socceroos have been in Sydney since Tuesday and have been preparing for the biggest game of the World Cup qualifying campaign so far.

They have had all manner of media commitments since their arrival in Australia.

When Neill, the West Ham United captain, was asked how the preparation was going, he said, “Preparation has been a bit slow, little bit inconsistent, with various commitments, training in between public appearances but now it’s all been stopped we can focus solely on the game, which is why we are here.

“It’s always good to come back here and spend a bit of time with the public and raising the profile of the game. Now that’s done, the best way to raise the profile is to win the game that could possibly take us to South Africa.”

The one thing I have noticed when speaking to the Socceroos in the last week is their fierce determination.

Players that have stood out for me this week have been Scott Chipperfield, a very relaxed character but also intense when need be.

Luke Wilkshire is the kind of guy that you feel you could share a joke with, and the Australia tattoo on his leg is a sign of his commitment to the cause.

All sorts of weird and wonderful questions are asked during a media scrum, including, “Is there much difference playing at home or overseas with such an important game on the line?”

I sometimes wonder if some of these folk have ever been to a football game.

My question to Lucas seemed to rile him a little bit, though:

“You've got unfinished business after that shocking penalty decision against Italy, does that drive you?”

He paused, shook his head and answered forcefully, “It’s not the reason why I want to go to the World Cup.

“We want to go to the World Cup because it’s the World Cup, to get the chance to play against Italy, Brazil and Croatia again, and try and emulate the mini success we had in the last World Cup, and go one step further and make sure it’s not a fluke.

“We didn’t want get there to go just once and say it was nice and to do it 30 years later.“Every four years we want to get there consistently, bring our rankings up in the world, and be a team and a force to be reckoned with all over, with respect.

”So perhaps that question is old news; Neill has been asked about 'that' penalty for years.

But with the spot-kick by Italy’s Franseco Totti being the last action the team experienced in 2006, you could say that all the Socceroos and their fans all have unfinished business, and I suspect most Australia supporters are eager to see them take care of that business on Wednesday night against Uzbekistan.