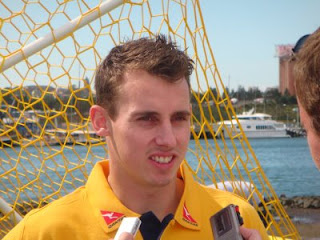 Before the last World Cup, Luke Wilkshire was playing his club football for Bristol City in English football’s third tier, an unknown in football circles in Australia
save for family and friends and folk in Shellharbour and Albion Park where he played as a youth.

When then-Socceroos manager Guus Hiddink included him in his squad for the 2006 World Cup, many fans raised their eyebrows – more were raised when he started Australia’s first group match against Japan.

A lot has changed in football in Australia since that time and Wilkshire is now considered one of his country’s most senior players.

Signing for FC Twente after the World Cup following Guus Hiddink’s instructions to him to find a “proper club”, he enjoyed two successful years in Holland and helped the club to a UEFA Champions League qualifying spot.

Luke next set his sights on Russia and became the first Australian ever to play in the Russian Premier League, moving to Dinamo Moscow in August 2008, playing thirteen games and scoring twice during the second half of the season.

Upon his return to Australia for a potentially decisive World Cup Qualifier against Uzbekistan next Wednesday, Goal.com spoke to him about his rise to prominence at both domestic and international level.

“It’s all been gradual for me, I’ve had opportunities and I’ve taken them,” Wilkshire said. “I’ve learnt and you could say I’ve matured.“Sometimes in football it’s about timing; you’ve got to wait for that opening or that opportunity and take it.

”The Dinamo Moscow man also remains unconcerned about the fact that the Russian Premier League is perhaps not as recognised as the more established European club competitions.He continued, “I think that Russia is now starting to get noticed a bit more and is getting a lot more recognition because of what the national team has been doing, and what the clubs have been doing in Europe in recent years.“

But of course the English Premier League, the Serie A and La Liga [Spanish Primera Division] are the big ones.”Despite the fact that Russia presents a number of cultural challenges, the 27 year-old continues to take changes to lifestyle in his stride.

At the weekend, Wilkshire played a full game during his side’s 3-2 home win over FC Khimki and the presence of snow didn’t dampen the Australian’s spirits.

He continued, “It was quite refreshing! I think the first game the sun was out, it was a very dry day and then we come out on the weekend the snow was there, so it was definitely fresh.“I actually enjoyed it. I’m pretty used to the cold.”