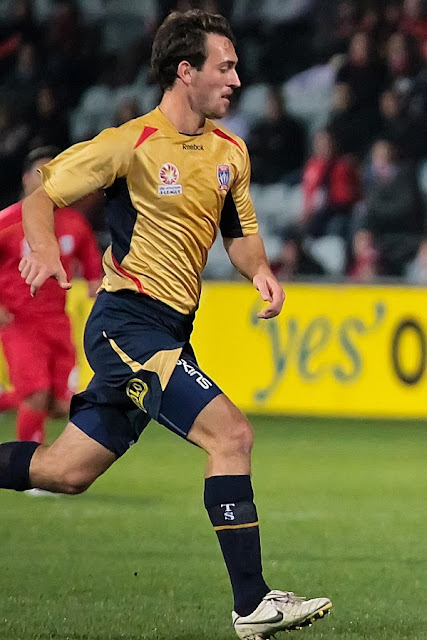 Here is an exclusive interview I did with Young Socceroos Captain Ben Kantarovski (pictured above)that featured in Soccer International magazine a few months back this time in feature style and uncut from original version. The Young Socceroos will be in Columbia in a few months as the Under 20 World Cup kicks off on July 29. Best of luck to Ben and the boys.
“This could be heaven or this could be hell” is a famous lyric from the Eagles song Hotel California and it seems an apt way to introduce my article on Newcastle Jets midfielder Ben Kantarovksi.
The Young Socceroos captain cites the Eagles as his favourite band and what better way to describe the Newcastle Jets season so far.
One moment the club cannot afford to pay their players salaries and the club is on the brink of dying and the next moment the club has it future secure for ten years with mining magnate and White Knight Nathan Tinkler riding on his steed to save the day for the Jets. Since Nathan Tinkler has taken ownership of the Jets David Beckham’s La Galaxy are on their way for an exhibition match, a new coaching structure has been installed as well as a new playing surface (although it would have helped if they had ordered grass for a full length pitch) . And in a sign of the club’s ambitions it also signed former Arsenal and England International striker Francis Jeffers. It’s never a dull time being a Jets footballer it seems.
Growing up playing Football
While still attending Lambton High school at 16 years and 208 days Ben is the youngest ever player to play in the A League and such was his impact he was named the Jets players of the season that year. Studying Psychology at University as well playing full time for the Jets you get the impression that Kantarovski is no meathead jock.
Able to play in midfield or defence and at 18 years of age you would think he is not quite the finished product yet. However the Newcastle born Jet has already been likened to former Socceroo legends Paul Okon and Ned Zelic.  Comparisons aside Ben is one of the A-League most cultured looking players, he is elegant on the ball and plays with a composure that belies his years. 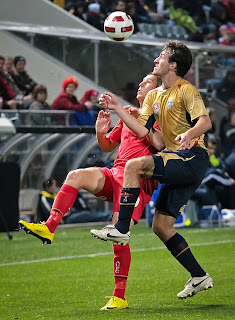 Newcastle Jets
I was lucky to speak to the Young Socceroos Captain and asked him about his feelings regarding the events that have been happening in Newcastle lately.
“There's definitely a good feeling around the place at the moment,” Ben said. “Things are obviously a lot more settled and everyone can concentrate on winning games. I've always loved playing for the Jets so it was great to re-sign for another three years. Things are really looking up for us.”
His love for the Jets can be seen when Ben talks about how the players stuck together during the period when wages were not paid. Speaking about this difficult time the midfielder talked about the close bond between the players:
“We've got a great bunch of guys here and we're all pretty close. Obviously it wasn't a great situation but we all came together and tried to concentrate on the football side of things rather than worry too much about what was going on off the field. With the new ownership there is definitely that feeling of security and I think that is a reason we are putting in much better performances in the last few weeks.”
While most A-League players are trying their luck overseas early in their careers Ben has just signed a three year deal with the Jets. Here is the midfielder explaining his decisions why:
“I feel like the club is heading in a good direction and I wanted to be a part of that.  Our position on the ladder doesn't reflect our team's ability and I know that we've got better seasons ahead of us. Hopefully if I continue to play well, those overseas opportunities will be there for me later on. For now, I am determined to play well for the Jets and hopefully be part of something special here.”
“We have a great squad at the moment.  Last year, we were probably a bit young and inexperienced but this year we have a lot more depth to the squad which is good.  Hopefully we can come away with a better result than we achieved last year."
Just recently Ben scored his first goal for the Jets against the then league leaders Brisbane Roar on the 17 November, 2010 and his second half display against the Wellington Phoenix  just a few days later was possibly one of the best of his career, showing  off  his  range of  deft passing and some neat skills hitherto not seen before. So the Jets are slowly starting to climb the ladder.
When asked the question what was different from the person and player that made his debut in January 2008 as the youngest player in the A-League at 16 years 208 days Ben spoke about his maturity:
“My age is probably the biggest difference”, Kantarovski responded. “I was pretty young when I started and have obviously matured a little bit particularly off the field.  On the field, I think I have matured in terms of the way I play.
Like most Aussie kids Ben grew up playing all sorts of sports but lucky for football he chose the round ball game. “I was brought up playing football since I was a baby really, I have experienced every other sport having played cricket, tennis, rugby, swimming, all those sort of sports and I have had a good go at them as well but they were not really for me and football was the one that prevailed – it always came first.  “
Asked who his biggest influence in his career he doesn’t forget his playing days with local Newcastle club Broadmeadow Magic. “There are a wide number of people who contributed to my football including coaches like Richard Hartley but the biggest influence were my dad”, Ben says. 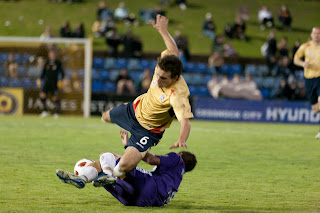 Bayern Munich calls
In March 2009 Ben caught the eye of European Giants Bayern Munich. It gave the young player a feel of what it was like to play in Europe: “Bayern Munich approached me and it was a good experience.  They had a good look at me and I got to experience the European side of football and it was great to be a part of that culture and that environment.”
Media pundits and ex players have compared Ben with former Socceroos greats like Paul Okon and Ned Zelic. When asked if it was hard to define yourself as a player with your own identity when the media loves to compare, Ben took a philosophical look at such comparisons:
“I think everybody compares in life and it is just a matter of doing your own thing and people will start to recognise that.

Socceroo Ambitions
When asked about his Socceroo’s ambitions Ben was just taking it a step at time but fans know it will be sooner rather than later.” At the moment, I have the U20 Socceroos and the World Cup in Columbia, hopefully, after that, I can make the Olyroos and we are able to qualify for the Olympics and then the Socceroos after that.”
FFA Technical director Hann Berger has gone on the record as saying that A League teams don’t give any chances to young players. When I asked if Ben thought more young players should be given a chance Ben was thoughtful in his response:
“That’s a tough one; it depends on the player and the coach.  I think most coaches in the A-League would like to give the young players but they have to show their worth and prove that they want it just as bad as anybody else.”
Young Socceroos
The Young Socceroos had a great Under 19 Asian Championships. They just missed out to North Korea in the final losing 3-2 in heartbreaking circumstances.  Getting past the Quarter Final stage meant that the Young Socceroos had qualified for their second consecutive Youth World Cup and for Ben it will be his second as captain.
When asked about  his feelings on the tournament and his feelings going forward on the World Cup in Egypt next year it was a proud captain speaking:
“Any time you're chosen to wear the green and gold it's a special occasion, but I really do enjoy the Youth World Cup. I think it's a great way to introduce young players to international football and really develop at that level.  I think we're all pretty excited to be going to a place like Columbia for the next tournament. I'm sure the conditions will be tough but I think that will be good for us.
“The experience gained and the teams we played against in Egypt motivated me again to want to better myself and to play those sorts of teams again”
Many football writers and pundits claim this is the best under 20 side since the teams of the 91 and 93 eras. Mathew Leckie, Tommy Oar and Kerem Bulut, when I put this to Ben he was happy to take the comparison:
“They are all great players and it's a thrill to be in the same team as them. It pushes you as a player to perform well, having guys like that in the team. I'm not sure how our side compares to the 1991 side, I wasn't even born then! But it's flattering to hear those comparisons all the same.”
On Young Socceroo Coach Jan Versleijen
Ben also gave us an insight into the Coach Jan Versleijen methods and it should get Socceroo fans excited about the future:
“The likes of Leckie, Oar and Bulut upfront with Amini in behind is a lot more attacking focused. The method really is just ball movement which is the key thing we need for the football the coach wishes us to play. It allows us to use the qualities that the front men have and play that attractive winning brand of football.”
So what about paying in Asia? Some of the senior Socceroos struggled during the 2007 Asian Cup but it seems like lessons have been learnt particularly in terms of preparation:
“Obviously hydration is an important part of the preparation because of the heat and humidity. You just have to stay on top of it and make sure your body is getting enough water, because it can be easy to cramp up late in games if you don't. The coach doesn't usually need to say much to get us motivated, we all know what's at stake and we all want to perform well every time we take the field.”
So away from the football pitch what does Ben do to relax? Living in Newcastle the sea has a big influence on the Jets midfielder:“I go fishing, watch a lot of TV, I love Harry Potter movies, and I study psychology at University which takes up a bit of my time away from football”
Ben Kantarovski may not get the headlines like some of the A-League’s attacking players do but at only 18 years of age and already a very important player for the Newcastle Jets and the Young Socceroos his value to Australian football cannot be understated and like the guitar solo in the Eagle’s song Hotel California watch out for Ben in midfield he will keep going and going and going.
Posted by A Football Story at 3/31/2011 12:53:00 PM