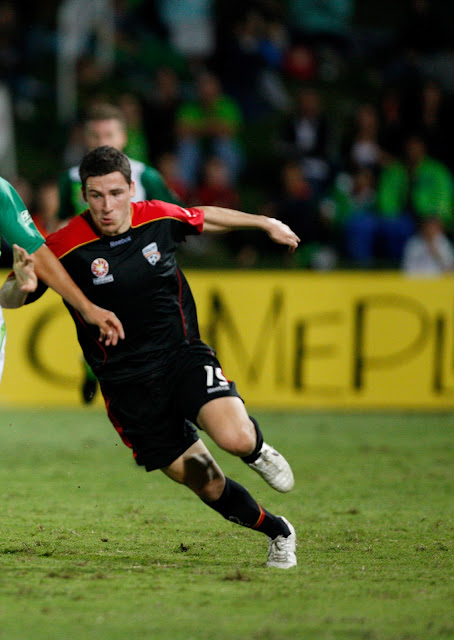 Here's an interview with upcoming Australian football star Mathew Leckie that featured in Aussie football mag Soccer International a few months back.
Mathew talks Adelaide United, Young Socceroos and his Senior Socceroos ambitions.
On his way to a club in Germany but not yet confirmed Mathew Leckie can be glad he is not left footed which leaves him free to find his own destiny, free from being called the next Harry Kewell (poor Tommy Oar, Dylan Tombides and James Troisi)
Aussie fans are really looking forward to the Youth World Cup which will be played in Columbia and commence on July 29 were hopefully Mr Leckie and his young Socceroo teammates can put on a good show. The A-League is on a break for seven years and the local football football fraternity will be having major withdrawals by then.
I'm sure the last thing on your mind is talking about the injury but what is the latest news and how are you feeling? 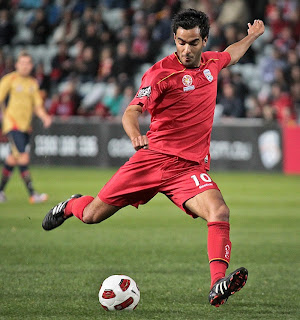 I think Rini has had a big part in it, but I also think it is down to a lot of other things as well. I think last year we had Reidy who was out for most of the year, he’s a strong part of our midfield. I think Hughesy is playing a lot better than what he was last year and I also think the additions of Sergio and Marcos ( Flores ) (pictured right) have been a big part of our improvement this year. They’re four key players in our attack and midfield, and our defence is also solid and not chopping and changing that much. But I think Rini has done a great job. We had Phil Stubbins for two months of pre season and he did a great job with us, got us all fit and ready, and then Rini came in and credit to him, he came into a team he knew nothing about and he’s done well. I think the whole coaching staff with Rini, Phil, Carl (Veart) and Peter (Blazincic), they all work hard together and it shows.
Tell us what it's like playing for the Reds? Rain hail or shine or even when you were coming last during season five they still offer passionate support?
It has been great. Last year we had a bad year, but it still showed how much the Adelaide fans love the club, whether we were last or first, we still had good crowds last year. We thank all of our supporters for sticking by us and it’s also great to see how many Adelaide United supporters have been showing up at our away games, it really helps the boys when we’ve got some of the crowd on our side.
Many are saying this season A League is the best ever? What do you think?
I can’t really answer that because except for this year, last year and a little bit of the year before, I hadn’t watched any of the A-League so I didn’t know too much about it. But I think it’s at a high standard and is only going to get better as the years go on because they’re starting to bring in big name players to promote the game and there is also some great young talent coming up. Even having coaches from overseas like the Dutch ones in the league now makes the game better.
What is the craziest thing you have seen on a football field?
I was watching a game on TV the other day, I can’t remember the teams that were playing but it was a final and the keeper has come out and let the ball go through his legs because he thought it was going to go out, and then the striker kept it in. I was just laughing thinking what was the keeper doing, and then with an open goal, the striker has kicked it straight into the post, and then his team ended up losing in extra time, so that was pretty crazy.
Mathew Leckie Favourites: