Gary Al-Smith is an Accra-based sports journalist and writes for kicker Magazine, ESPN and is the Ghana blogger for http://ghana.worldcupblog.org/


Are you reading this Pim?

Half Time Heroes: After the World Cup draw was announced, some dubbed Group D containing the Socceroos, Germany, Serbia and Ghana as the third group of death. What was your first reaction when you saw the draw?
Gary Al-Smith: First reaction: damn! And it was that because I felt this to be a great chance for Ghana to show the world what we’ve got to offer once more after the Germany 2006 experience. Don’t forget that this was before most of our players started falling off injured like flies so my confidence was justified I think.

HTH: What’s been the reaction by the management of your respective teams? Do they see the Socceroos as a threat?
GAS: Since the World Cup was introduced 79 years ago, it has been dominated by Europe and South America. As South Africa 2010 nears, bold predictions of a first African win have already started. Leading the way is Abedi Ayew Pele, three-time African Footballer of the Year.

“We definitely will have one African team that goes far and when I say goes far I mean as far as raising the trophy. When I make this prediction people laugh, but I believe it.”

Generally, the football populace now has even more trust in this side especially after surprising even Ghanaians with the runner-up slot at the recently ended African Nations Cup in Angola.

HTH: Who do you consider to be your key players and what are your teams main strengths?
GAS: Michael Essien, obviously. Currently our most popular player around the world by a mile. Then we’ve got the so-called ‘core of the Germany 2006 team’ who are still around: Sulley Muntari (Inter Milan), Stephen Appiah (Bologna), John Mensah (Sunderland) and John Painstil (Fulham).

At the time of writing this Q&A, all three are injured but they’ll surely be back and ready for the mundial. Yet, we cant help but notice the growing wave of (justified?) views that Appiah and Mensah should not be added.

They cannot seem to put together seven or eight straight games without injuries – just check the records.
The strength of the team has for years been the midfield, yet the Nations Cup has shown a collective defensibility in the side that we haven’t seen in about ten years.

That said, this Ghana team is in transition and there are some great players coming through who may explode in South Africa. Eight of the team that won the Under-20 World Cup in Egypt were in Angola and some of them are really giving the coach headaches because he is suddenly spoilt for choice in certain areas.


HTH: Any weaknesses that you care to quietly mention?  A dodgy keeper or a suspect defender perhaps?
GAS: Straight up. It’s the left back. It has been our problem for ages. The coach said in December: “We have always had problems with the left back slot so this is a chance to try other players in that position,” he said.

About four players have been used in that role in the last few months and many teams find that as Ghana’s Achilles heel. However, certain players in the local premier league are mounting a strong challenge for that slot and fingers-crossed, we may get a natural left-back soon.

Striking is also a headache. We rely heavily on the midfield for goals. Strikers usually don’t bang in much however Kevin-Prince Boateng (Portsmouth) would soon be given the okay to represent Ghana. And Mario Balottelli of Inter is being persuaded to feature for us. Now that would be some attack!

HTH: What do you know about Australian football and are there any players you think your team should keep an eye on?
GAS: Australian football has been introduced to us in the last few years with a few games we’ve played together recently: drew 1-1 in November 2006 and Australia beat Ghana 1-0 in May 2008. However you’ll agree that times have changed since then and June 2010 will be a different ball game.

HTH: How do you think your team will adapt to the conditions in South Africa where teams can expect high altitude,  differing weather conditions and those ubiquitous vuvuzelas that will be blasting for the whole game?
GAS: Ghana camped for two weeks in the north-eastern town of Nelspruit in South Africa to acclimatize with regional conditions before the Nations’ Cup. Our FA has also booked the place in advance for the World Cup so it should be a familiar place for most of the team – that is if the bulk of them are chosen from the team that went to Angola. 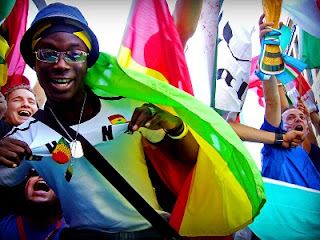 HTH: Australian fans have bought tickets in large numbers. What kind of support can your team expect in South Africa?(Ghana football fan in Germany 06 pic by Dario Sarmadi.)
GAS: We’ve got Supporters Unions that have been planning meticulously for the event. They went to the Nations’ Cup also to have a feel of the terrain. As to the ordinary man, South Africa 2010 has engendered many businesses here to spring up and travel packages are already available. Come the start of the World Cup, Ghana would have a good representation, no doubt especially as the country has a decent population in South Africa.

HTH: Are you happy with the coach and the way the team is playing leading in to the world cup and is there anything you would change?
GAS: Personally, except for one or two issues, the way he led the team to Angola pleased me. He played to our strengths and everyone agreed that the tactical discipline in this side was a new sight, to be honest. Let me say here, that the team that is playing now would not be the same as what will be seen this summer. Key players are injured and when they come, they’ll take their spots because we need the experience.

HTH: Tell us the player in your team that annoys you the most and why?
GAS: That should be Haminu Draman. He runs with the ball for miles and gives it away and his shooting is disastrous. Yet, he has proved very useful. You may see him in South Africa because though he blows hot and cold, he runs at defenders a lot and is able to create spaces for others.

HTH: The player you like the most?
GAS: Now that’s hard. I can’t say, though I can tell you I have a very high regard for Michael Essien and Kwadwo Asamoah (Udinese) at the moment. Samuel Inkoom gets a mention and of course Anthony Annan and Emmanuel Agyemang-Badu. Those last two are all Essien-lite!

HTH: Lastly please give me a prediction on how your team will progress and also who will be the winner and loser of the World Cup?
GAS: Let’s begin with winner: I’m seeing Brazil or Argentina. Ghana should go into the second round by the scruff of our neck and maybe then, the dream ends. Yet, I said the same thing before they went to Angola and see where they got to? The final! Maybe, a repeat is in order…you never know.


This Interview appeared in Half Time Heroes February