No, I’M Jack the Ripper
Who wants to beat England? I know I do! The World Cup draw means that a potential round of 16 clash between the Socceroos and England is a real possibility.

Also the World Cup bid for either 2018 or 2022 will be decided in December this year and this pits Australia directly against England. I spoke to a well known media personality in England about  Old Blighty’s chances at the World Cup in South Africa and for the World Cup bid.

Half Time Heroes: England’s World Cup group compared to some other teams was relatively easy with USA, Algeria and Slovenia. Will England win the World Cup?
Dave from Bow in East London: One problem is we love the underdog to win in any team competition, so with our ‘team of life’ it’ll be hard not to support Slovenia and Algeria for at least part of each match. Will England win? Don’t you remember 1966?

HTH:Who do you think are your key players?
DFBIEL: Simon Cowell (pictured below) and the commentator from the 1966 match who uttered the immortal phrase “they think its all over...it is now” (a piece of commentary anyone living in England will hear about 25 times a day from the start of the tournament)

HTH: England’s main weakness is having to cope with the pressure from themselves and an expectant public what’s the hubris level like this time?
DFBIEL Hubris? after 1966? No chance.


HTH: As an Englishman would you have preferred an English manager as opposed to the current boss Italian Fabio Capello.
DFBIEL: The Romans, ice cream, Isabella Rossellini...um...thats about the end of the list for interesting Italian exports. After all, We didn’t need an Italian in 1966.

HTH: The World Cup bid for 2018-2022 has England as the favourites for winning in 2018, Australia is not for behind in terms of the current odds but even as an English man you must admit that Australia should host in 2018 and England can have it in 2022. It would be much better in warm welcome country as apposed to cold and rude Old Blighty, wouldn’t you say?
DFBIEL: I had no idea we were even in the running, and I think you forget global warming in your calculations there, my son - England will be a warm and tropical climate by then. I’ve got an Aussie mate who thought everyone hated him for the first year of living here because everyone was so rude to him at work and down the pub.

Then he realised it was just our sense of humour he didn’t get and everyone had liked him all along. If, for the sake of argument I can say he represents all Australians, I’m not sure that a nation which is thin skinned, and is a bit slow on the uptake is an ideal host for a multi-cultural sporting event. And we have form hosting the World Cup, I think it was in 1966, by all accounts a very successful tournament.

HTH: What would you say if the Football Federation of Australia used this Bill Hicks joke to sell Australia as a better World Cup destination than England?

Bill Hicks On Convicts being sent to Australia:
“Let me get this straight... You keep the shitty food and the shitty weather and we get the Great Barrier Reef and lobsters the size of canoes? ...I’m Jack the Ripper! --No, I’M Jack the Ripper!”

DFBIEL: You don’t get the joke do you? It’s not about us, its about you 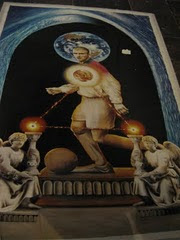 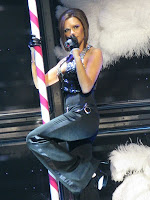 HTH: David Beckham and Posh Spice;
too much is not enough or leave me alone already?
DFBIEL: Who’s asking?
(pictured left, Posh reckons that England is in pole position to win the World Cup in South Africa.Photo of Posh by Darkness Blackheart)

HTH: The English Wags (wives and girlfriends) get as much coverage as the players what do you think of this recent phenomenon in football?
DFBIEL: We’ve always liked a bit of glamour and a touch of class in our game (see 1966 final for instance), and if our team isn’t supplying it, then all power to the WAGs I say.

HTH :What would you say is the current vogue in hooliganism fashion? The  polo t-shirt, loafer wearing skinhead apparel, or the Chav, tight jeans and hoody over the head type look?
DFBIEL: Something with big pockets coz you have to dig deep to fork out enough readies to see the inside of a stadium these days.