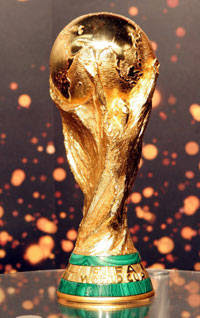 Australia’s bid for the 2018 World Cup just intensified with news last week that Russia’s football governing body says it intends to spend $10 billion on the World Cup.
Sportal Australia reported this week that Football Federation Australia (FFA) CEO Ben Buckley met with South Australian sports minister Michael Wright this week to discuss the possibility of Adelaide hosting matches at either the 2018 or 2022 World Cup should Australia win the hosting rights to either tournament.
With reports that the South Australian government has ruled out any chance of building a new stadium for the event, an existing plan to extend the Adelaide Oval to a 36,000 capacity has thrown Adelaide’s participation into question, with Ben Buckley telling Wright that it would not be big enough to be part of any bid.
The purpose of the meeting with the South Australian sports minister was to inform the government of some key time-lines related to the bid and to brief them on FIFA's technical requirements."I also advised that FIFA's technical requirements include a minimum capacity of in excess of 40,000 spectators," Buckley said.
Buckley has stated that the stadium does not have to be built or even under construction in that timeframe."It simply means that there needs to be a commitment to a FIFA compliant option on the basis that the bid is successful," he continued."We've always been committed to a solution in Adelaide to ensure it is part of a successful bid, and we look forward to continuing to work constructively with the South Australian government to make that happen."
Russian Threat
While the FFA is trying work with the various state governments in getting the stadium issue sorted, Russia is steam-rolling ahead its with plans.
The Sports, Tourism and Youth Policy Minister has promised that five world-class stadiums will be completed by 2013: two in Moscow and one each in St. Petersburg, Kazan and Sochi, which is scheduled to host the 2014 Winter Olympics.
It has also been reported that Russian Prime Minister Vladimir Putin has ordered Sports, Tourism and Youth Policy Minister Vitaly Mutko to prepare the bid for Russia to host the 2018 football World Cup.“Prepare the host bid for the 2018 football World Cup. Such participation will let us develop the infrastructure in cities like we’ve been doing in Sochi, and even if Russia fails to win the bid, all state programs, like building new stadiums and sport centres, should be accomplished anyway,” Putin said
.Mutko, who is also the head of Russian football's governing body, says the country is ready to spend some $10 billion on the World Cup.FIFA has confirmed that 13 countries, including two with joint bids, submitted applications to hold either the 2018 or 2022 World Cups.
The FIFA website has stated that Australia, Belgium together with the Netherlands, England, Indonesia, Japan, Mexico, Russia, Spain and neighbouring Portugal, and the United States have submitted bids for both competitions, while South Korea and Qatar have turned in bids for the 2022 World Cup.
The countries approved for hosting the 2018 and 2022 competitions will be announced in December 2010.
A Thorn In The Side
The FFA will decide on the cities and stadiums which will be part of its bid later this year.The issue of football stadiums in Australia has been a thorn in its side over the years as all over the country, Australia doesn’t really have any football specific stadia.
The Sydney Olympics in 2000 saw the football tournament played over the country, however, when the stadiums where upgraded, most of the money went into upgrading Aussie Rules and cricket grounds.
Friends In High Places
There were two important outcomes for the FFA in its quest for the World Cup in 2018 last week:Firstly, the outcome of the election for the Asian Football Confederation (AFC) FIFA Executive, which took place in Kuala Lumpur last week at the AFC annual congress. The election was won by incumbent Mohammed Bin Hammam in a contest against the President of the Bahrain Football Association, Sheikh Salman Bin Hamad Bin Isa Al-Khalifa.
Having the support of Bin Hamann will be crucial as Australia will need the support of the AFC chief to lobby other Asian nations.
The second positive outcome for Australia was the election of Ms Moya Dodd to an official position on the AFC executive. Dodd, who becomes the first Australian elected to such a role, will act as a vice president on the board.
"In only our fourth year as a member of AFC, it is wonderful to have an Australian on the executive of the AFC and Moya is a great representative for us," said FFA Chairman Frank Lowy.
December 2010 is the deadline for the announcement of the 2018 and 2022 World Cup. All of the Australian football family hopes the FFA and the state governments can work together in bringing the best bid to FIFA.
Like at the World Cup in Germany 2006, Australia will hope to topple the heavyweights; competing with the likes of favourites England and resource rich Russia will be tough, but that’s the way Australians like it.Con Stamacostas, Goal.com
Posted by A Football Story at 5/15/2009 09:48:00 AM