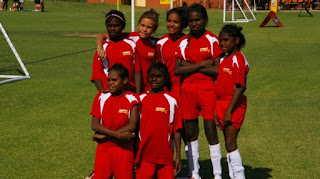 With Matilda's stars Kyah Simon and Lydia Williams shining a light on the quality of Indigenous footballers in Australia during the recent Women's World Cup in Canada, the next generation of talent is being cultivated in a remote part of the Northern Territory.
Seven Indigenous girls from the remote Gulf of Carpentaria, are currently representing the Northern Territory at the Football Federation Australia National Youth Championships in Coffs Harbour.
The girls are part of an organisation started by the first Indigenous player to be chosen to represent Australia, John Moriarty, who was born in Borroloola – which along with the Robinson River is part of the area the John Moriarty Football program locates Indigenous talent.
Listen now to Elvis DeMarchi, the program manager of John Moriarty Football to find out more about the organisation and the work they are doing.