The 2015 Asian Cup is over and the comedown/hangover has already begun.

So to help from any Asian Cup withdrawals you are having it's time to look back on the highs and lows, the winners and losers as I give out my 2015 Asian Cup Awards.

The Socceroos
Was this victory as good as the Socceroos qualifying for the World Cup in 2005? Or the Japan and Croatia games at the 2006 World Cup?

Some fans tell me it is, I wish I wasn’t in the toilet when James Troisi scored because I would be saying it was right up their too.

Now I have to wait another 50 years when Australia hosts the Asian Cup again and Troisi’s grandson scores the winning goal against South Korea in extra time.

Multiculturalism
The Australian fans from all backgrounds confounded nervous organiser’s worries of a low turnout by coming out in their thousands to make this Asian Cup a grand spectacle.

Multiculturalism was the one of the big winners as fans from all over the word with different ethnic backgrounds showcased a different side of culture that the Australian media usually portrays.

Usually associated with terms like refugees, boat people, or even sometimes terrorists, these were simply football fans, enjoying themselves and supporting their team and respecting the opposition.

Iran fans holding placards such as this is what a free Tehran looks like, Palestine fans watching an historic occasion in Newcastle were indicative of the tournament vibe.

The adopt a second team strategy worked to make this Asian Cup more than just about the home team, from the comedy element of Australian fans making fun of North Korea by dressing up as  Kim Jong Un, to the strong turnout in Canberra and Melbourne when teams like North Korea, China, Iraq and Iran played.

Sepp Blatter
The sneaky Penguin from the movie Batman Returns Blatter had the nerve to come to Australia and help present the Asian Cup to Australia after FIFA gave the 2022 World Cup to Qatar.

Are you watching Sepp?

Did you see who good this Asian Cup was? Did you see what an amazing show the 2022 World Cup would have been if you gave us the tournament?

Dudes at the AFC x2
Certain members of the Asian Football Confederation for trying to stir shit up before the final by hinting that they wanted to kick out the Socceroos of the AFC.

The AFC get two loser awards and the second one is for not giving any prize money to the winners of the Asian Cup.
An official quote from the AFC was:

“As such, any surpluses generated through its activities are reinvested in its competitions and other football development activities.”

My official quote back is: “Show me the Money!”

The funniest one was the next day after the final when the Socceross where celebrating with fans in Pitt Street Mall, Sydney.

While talking to the mainstream TV media scrum Cahill offered his thoughts about what winning the Asian Cup meant for Australian football and then showing the same agility and athleticism as when he scored that bicycle kick against China, he quickly posed for a selfie with adoring Socceroos fans, all in the same movement.

The Ben Williams Award for Highest Achievement in Refereeing Standards goes to..

Ben Williams
Williams’ refereeing performance copped it in this tournament, accused of holding a grudge against Iran coach Carlos Queiroz and of not giving penalties to John Aloisi as a player or as a coach.

Williams’ refereeing performance might benefit from a change in attitude he should see grudges as a place to park his car, not to hold one against one of team’s coach you are refereeing. (Thank you the 12th Man).

The Fans of the Tournament Award goes to…

Superstitious Italian-Australian fans sitting next Dave during the final.

A group of Socceroos fans with Italian background were sitting next my mate Dave during the final.

Dave who is of Italian background got chatting with a member of that group because he noticed that all five of them were doing the gesture that you sometimes see at heavy metal and rock concerts.

But Dave found out that the Italians-Aussies were not rocking out, they were actually doing the il malocchio or the evil eye which is an old Italian custom. They were aiming the hand gesture at the South Korean team to try and curse them with bad luck.

The lady sitting next to Dave explained that because the South Koreans were wearing a red strip that meant the malocchio hand signal didn’t work so well. 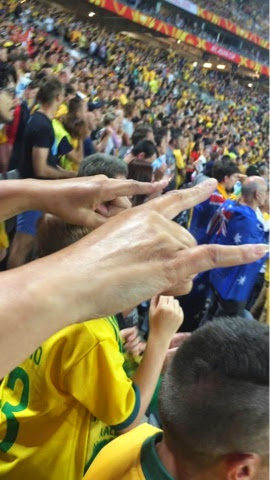 So to get it to work more effectively they wore their underpants inside out, so this would reverse the curse!

This is no joke!

The Socceroos and Ange Postecoglou should give a thanks to the superstitious and eccentric five Aussie-Italians for cursing out the South Koreans and helping win Australia the Asian Cup!

The Messi Lookalike Contest Winner is….

Or the UAE Chad Gibson?

Or the Kuwait Alun Hunter?

Or the Japan Nick Meredith?

Surely some hard working journey man comparison would be nice for a change.