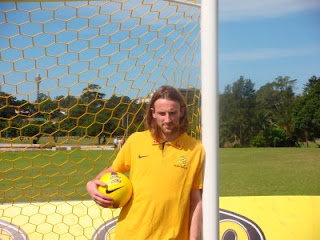 Australia could make history by making back to back World Cups for the first time, and also be the first country to qualify for South Africa 2010


(Picture:Josh "Jesus" Kennedy, will he be the Messiah again for the Socceroos?)

Qualification is nigh, South Africa is only 90 minutes away. One point against Qatar who is still fighting for the third playoff spot is all the Socceroos need to get to the World Cup.


It won’t be easy Qatar will be no push over. The Maroons need to beat Australia at home or Japan away to have any chance of getting that third playoff spot.

But is the Bruno Metsu coached side really a threat to spoil the party? Australia has thrashed Qatar home and way in previous World Cup Qualifying games.

Close to four am Sunday morning Sydney time the Socceroos are going to create new history by going back to back and being the first country to qualify for a World Cup.

Diminishing Returns
The economic concept springs to mind looking at Australia’s impending qualification. Drinking from the qualification cup the first time quenched the thirst after missing out on World Cup participation for 32 years.Will drinking from it a second time be not as refreshing as the first?

The concept will tell you after the first time the second drink becomes less refreshing. Some folk have said that if Australia does clinch qualification on Sunday morning then it could be a bit of an anti-climax compared to the excitement of extra time and penalties four years ago against Uruguay, when the feelings where of jubilation, relief, joy and ecstasy.

Those are a lot of feelings for one moment, and it will be hard top that dramatic evening in November 2005.

Vince Grella also spoke about that night during the Socceroos preparation in Dubai this week:

“I don't think you can simulate that feeling ever again.“I think that just sits in the history books of Australian football and will never be touched again.” the Backburn midfielder said.

Qualification-Take Two
Playing Qatar in 45 degree heat and only needing a point to qualify doesn’t sound as sexy as coming up against the divine right that Uruguay supposedly had, never mind the revenge factor, and the 32 years wait.

There will be celebration around the country if the Socceroos get the result they need against Qatar; however the feat will not be seen by all as the game will witnessed by thousands rather than millions, given that to view the event you have to find a cable TV somewhere.

Hearing about it on morning breakfast radio or morning TV shows will not be the same as watching it happen live in front of you.

The game in Doha could see Australia be the first country to qualify first for South Africa a scenario that Australia faced against Uzbekistan back in April. The Socceroos depended on other results in other games later that night; but it wasn’t to be, so the “First Take” against Uzbekistan was a good dress rehearsal.

Facing Qatar is “Take Two” for qualifying for South Africa 2010; hopefully the Socceroos can remember their lines and get the point they need.

The Game
The Socceroos now have their destiny in their own hands, on Sunday morning at around two am the team will be greeted by 45 degree Doha heat and a small but loud and enthusiastic crowd which will sing (some with their own microphones and PA) all game.The squad will be missing starting players Luke Wilkshire (suspended), Craig Moore (not fit) and Tim Cahill might be missing because of a nock he picked in the FA Cup loss to Chelsea over the weekend. Brett Emerton who loves scoring against Qatar is also missing with a knee injury; he also missed the last two games.

The other remaining question of this game will be Pim Verbeek tactics. Will he change his pragmatic safety first view? I doubt it, judging from Verbeek’s previous tactics and squad selections in away games, don’t expect any Nick Carle’s or twin strike force. A packed midfield and a lone striker will be Pim’s weapon of choice.

Loyalty seems a big theme in Pim’s squads as Brett Holman’s selection can attest to that. The AZ midfielder can divide opinion of fans and pundits alike. He has only played 17 games this season and has only featured in three of the last 20.Josh (Jesus) Kennedy has been playing games for relegated Karlsruhe, and after figuring prominently in the last six of the season the player with a record six goals in 12 games for the national team should be a good chance to start.

I’m sure some fans are thinking “give Jesus a chance” especially since Mark Viduka has not agreed to join the Super June campaign. Maybe it’s time for Pim to show Jesus some love?

The Future
One of the negatives has been the lack of young players breaking through to the senior side, only Mark Milligan and Mathew Spiranovic has made the side from the Olyroos team that played at the 2008 Beijing Olympics. David Carney and Jade North are in the Super June squad and where in the same Olyroo side but where picked as over aged players.

Bruce Djite and Dario Vidosic made the senior Socceroo squad for uber June and their inclusion will please many fans, the outrage over their non -selection in the Olympics squad only tempered by their inclusion in this one.

James Troisi is a member of the Oyroo squad that can count himself unlucky to not be picked, as he has played 29 games and scored six goals for his Turkish club Genclerbiligi this season.

Speaking of young players, 20 year old Rhys Williams gave up trying to speak Welsh and has pledged is allegiance to the Aussie flag, picking the Socceroos even though he had played 10 times for the Wales under -21 youth side.

Rhys is a fine example that one simple phone call could get you to the World Cup.

Hopefully all goes well in the sticky heat and humidity of Doha the Socceroos qualify with a win and the country can celebrate and look forward to a South African adventure in 2010. Even if the country doesn’t go off like a frog in a sock most fans will be delighted; even a small jig in celebration of this history making achievement will be called for.