Verbeek, My players are ready 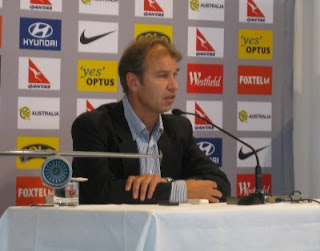 With the hours counting down to today’s World Cup qualifying match an excited but cautiously confident Australia boss Pim Verbeek has delivered his final press conference yesterday in front of a packed international media contingent vowing that the Socceroos where ready to face Uzbekistan.

While all the number crunching has been done, a win for the Aussies and a draw between Bahrain and Qatar a few hours later will determine whether the Socceroos and the rest of the Australian football fraternity can pack their bags for a back to back World Cup appearance and a sojourn into South Africa in 2010

Verbeek's Feelings
When asked how he was feeling the tall Dutchman gave his thoughts:
“I will tell you tomorrow after the game, how I feel then. For this moment for us it’s a game and we know we have to win I’m not sitting the whole day and thinking if we maybe we are qualified, so I think we did very well 4 games 10 points six goals, the last home game we played we scored 4, it’s the only home game we played in this qualification so far, we can be confident but we should not be arrogant and think it’s an easy game. I’m sure my players are not arrogant and thinking it will be easy, they will be ready tomorrow.

Uzbekistan Threat
While most Australians would not be able to pick Uzbekistan out on a map; Verbeek who was hired by the FFA for his experience in Asian Football was not taking the former Soviet republic lightly.

“I am probably the only one in this room that said they are a very difficult team to play against, and they showed that again on Saturday ( after beating Qatar at home 4-0) so we knew they were good we knew they were unlucky in losing previous games even though they are a much better team.

When sizing up the threats of Uzbekistan for tomorrow’s game Pim was asked if hat rick hero of that Qatar game 22-year-old Pakhtakor striker Farhod Tadjiyev was going to trouble the Socceroos:

“If you score three goals in a game like that we have to be careful with a player like that, of course they are all good players, so I’m not surprised about the quality of the team.”

Speaking about the long trip Uzbekistan had to face and if they were going to be able to recover after only playing on Saturday the former South Korean coach talked about the advantage Australia had playing at home:

“You have to wait how they will be after the tough game on Saturday all the travelling they have to make but they are back in the race, it makes it a very dangerous opponent for Wednesday.

"Home and away is totally different of course, people who saw the game last Saturday they saw it was a difficult team to beat in Uzbekistan, you always say it’s three bonus points, to go over there and win, you saw the fans they are very fanatic, it’s difficult to play; again I think they had 12 corner kicks in the first half it was not an easy game, for us also over there, but here it’s a different game, we play at home we have the fans and we are ready to play”.

Speaking of how the game will go Pim was confident he had the right game plan:

“We all know all the qualities of Uzbekistan, we know how good they are and the most important players, we know the balance of the team, we think we know how they cope, so it’s not so interesting for me to tell you who I am looking for, we all know that they are a good team , with players with some special qualities, my job and the job of my players is to eliminate those qualities and use our qualities too.

"If you look at the line up, it’s very interesting, they haven’t played in the same formation, not even with the same 11 players, they all the time are changing formation, I did exactly the same, It’s nothing to do that with not wanting to play the same system, you all the time have different players available, but I think I know how they are going to play."

The First 20 mins and thoughts on the game

Asked if like in previous home games Australia where going to attack from the start Verbeek responded in his typical Dutch way:

"In games like this it’s important who scores the first goal, that’s always in football you can say, games like this there is so much pressure on both sides, that can make a difference, we have to be aware of that, you prefer to score in the first minute.

The formation the Socceroos have used at home especially against Qatar where they triumphed 3-0 and 4-0 has been in the form of a diamond formation in midfield with PSV Midfielder Jason Culina the only holding midfielder, an attacking midfielder at the point in behind the two strikers and a player each on the left and right of midfield.

When asked if he proposed to do the same in this game, Verbeek was being a bit coy:

When quizzed on his striking options the Dutchman was still not giving much away:

“It’s not about the combination of Kennedy and McDonald, it’s about the other eight players on the field, I can put six strikers, but I think also you have to think how we can get the strikers in scoring positions, so I think it’s a good combination, definitely a good combination."

"We will see tomorrow what I am going to do, depends on the physical shape of the players so you still don’t know anything."

With excitement building the Dutchman who himself is debuting in World Cup qualification series was sure the players and himself had the mind on the job rather than thinking further ahead:

“I don’t have the idea that the players are thinking that we are there already. I don’t have that impression at all they know we want to qualify as soon as possible we know winning tomorrow bring us a big step forward we have four games to go and so we have to prepare to play four games.

Whether he was excited about the game the former assistant to Gus Hiddink who was on the side lines next to Hiddink when South Korea made it to the semi-finals at the World Cup in 2002, Verbeek was more forthcoming

“I’m excited, it’s great to play games like this.

“It’s fantastic, every footballer every coach wants to be involved in games like this, really looking forward to playing, it‘s a big game exciting game, everyone understand what’s asked of them."

He also felt the excitement and anticipation of a history making consecutive World Cup appearance:

“It’s the same excitement we have, that’s why you play football we are so close we are working so hard for 15 months, travelling and playing games and no preparation, fighting with many injured players, the medical staff did a great job, everybody did a great job this week to get the three points with three points you make a very very big step towards the World Cup."

Cheeky Pim
The pragmatic coach even had a bit of time to show his cheeky side when asked if entertaining the fans was important:

"No I put 6 strikers on the field, I don’t care about defending at all, hopefully it will be 6-6 and everybody is happy except me, I’m here to win the game, I like to win with many goals but let’s go for the win and that’s all that counts"